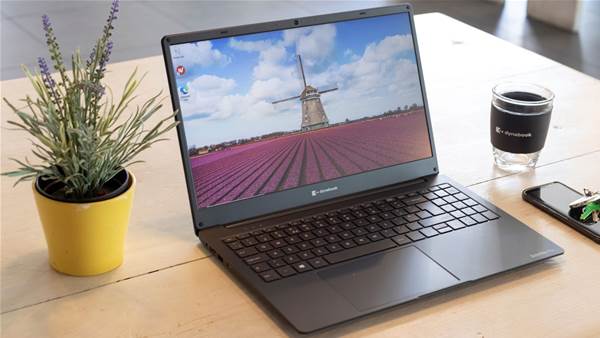 Dynabook is the evolution of Toshiba’s laptop division which subsequently got bought by Sharp... another great name in notebooks... at least in Asia. We recently reviewed the company’s Portégé X30W-J 2-in-1 laptop-cum-tablet and were impressed. Now here’s the Dynabook C50-H which is more of an affordable, general productivity device. So, should you buy it?

The screen is a 15.6-inch Full HD, matte offering. It gets bright and has reasonable viewing angles – a good balance between off-centre viewing and privacy from those sitting next to you. Colours are somewhat muted when compared to high performance multimedia screens, but they’re fine for the likes of web conferencing and casual multimedia consumption. In a world of thin borders, this doesn’t have one, it’s also prone to wobbling when knocked. It’s protected by a rather flimsy lid which eschews strength for weight-loss.

Above the screen is a simple HD webcam with dual-array microphone which offers reasonable web conferencing performance. The Scrabble-tile keyboard is comfortable to type upon with low travel height. It stretches from one edge of the chassis to the other and includes a number pad. The large trackpad is accurate but clicking the buttons is a bit annoyingly heavy.

The entire laptop is generally solid but the chassis steel feels a bit plasticy and cheap. However, it’s matte-black looks belie this view and it looks classy enough to fit into any home or office environment without blighting it.

Inside is Intel’s 10th Generation Core i7- 1065G1 quad-core (with HyperThreading) processor which operates between 1.3GHz and 3.9GHz. It’s flanked by a stick of 16GB RAM (a spare slot is usable – although Dynabook itself says it’s not simple for users to reach it) and a fast 512GB NVMe hard drive. These combined to score 3,609 in PCMark 10 which is a bit slow in the current market – Standard 2020 Office laptops are some 30 per cent faster according to PC Mark. However, only hardcore Excel and Database operators are likely to notice.

The Intel 620 graphics are, not surprisingly, not great for gaming. It scored only 668 in FireStrike Extreme which equates to an average of 3fps. It did manage 6,214 in the Night Raid casual game benchmark which is an average of 30fps so, don’t expect too much.

On the left is an HDMI port, USB-A 3.1 port and a USB-C 3.1 port. On the right is another USB-A port, Gigabit Ethernet, 3.5mm audio jack and a microSD card reader. There are also last-gen Wi-Fi 5 and BlueTooth 5.0 wireless connections. All in all, it’s a respectable complement that has the important bases covered.

At 1.76KG it’s reasonably light for a 15.6-inch laptop. The two-cell 45Wh battery also punched above its weight and ran PCMark’s Modern Office test for 9hrs 46mins. We’re just a little concerned that the lightweight chassis structure will struggle to protect it from life on the road (or in a a school).

The speakers are middling: there’s not much punch and the treble tops out quite quickly but overall fidelity is well rounded. They don’t get particularly loud though.

Our top-end Dynabook C50-H variant (SKU: PYS33A-023020) has a $1,549 price tag which is fairly reasonable. In fact, counting back, reasonable is an adjective that’s used a lot in this review (and also Dynabook’s marketing literature too). In this sense, it does what it says on the tin: if you want a decent laptop that embraces value at the expense of bells and whistles, it’s a reasonable buy.