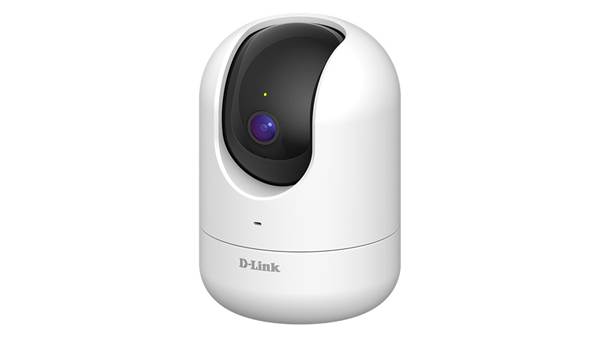 An easy-to-use, well-featured Wi-Fi camera that has free(ish) cloud storage.

When it comes to casual security cameras we’ve always been disappointed by at least one element of the product: they’ve either had impractical mounting systems, require electrician-level skills to set-up, use overly complex methods for network connectivity, require you to subscribe to expensive cloud storage services to make the most of them or are lacking in image quality or features. The good news is that D-Link’s DCS-8526LH Wi-Fi camera doesn’t seem to have any of these flaws.

The camera can pan 340o and tilt 100o. Meanwhile, the lens captures a wide 138o world-view in Full HD and you can adjust its outlook (and set a home position) just by dragging your finger across a panoramic view within the app. Two-way communication is also possible using a push-to-talk soft button and audio-quality is surprisingly good at both ends. Video quality is impressively sharp and distortion free and integrated IR cameras enable impressive night-vision at a range of up to 5m.

Setting up is simple via the mydlink app – you just scan a QR code on the product and run through the instructions for connecting it to your network (which can also be done via Ethernet). Video can be stored locally via a microSD card or a network video recorder (using ONVIF Profile S) but best of all, in D-Link’s Cloud. The latter means that even if a thief runs off with your camera, images are kept off-site.

A one-year basic subscription is included which allows you to store one-day of HD footage at any one time, for up-to three cameras. You can also pin 50 clips that won’t be overwritten. After that you’ll need to pay but US$24.99 per year won’t break the bank. This version of the alternative Basic subscription (Premium Basic?!) includes seven-days of recording, 100 clips saved and Full HD capture. Other plans are available for those who want more cameras and more footage captured.

In reality it works brilliantly. If noise is detected you’re alerted and can simply switch to Live View to see what’s going on. However, if a person is detected, they are captured and tracked, you’re sent a screenshot and can quickly watch the recording from the cloud. In reality it gets set off by cats and we even caught our robot vacuum playing football. A sudden change in lighting can also trigger it, but this was rarely annoying… just a sign that the system worked.

Flipping a virtual switch in the app turns on privacy mode which essentially makes the camera rotate backwards into its body. You can set this to happen automatically during a schedule when you’re away from your premises or easily override if you pop back for whatever reason. You can also quickly switch profiles via fast-access buttons to set for when you’re Home, Away or Asleep. These ‘scenes’ can be further customised with automations that let you choose when a recording should be made and who should be notified.

The camera is compatible with Alexa and Google Assistant. It can also be ceiling mounted and comes with a bracket. It’s powered by a single power cord.

Ultimately, the DCS-8526LH behaves exactly how we’d like a Wi-Fi camera to behave. It does everything we could want from such a device and is simple and intuitive to boot. At $149 it’s great value for anyone who wants to monitor the kids downstairs, look-in on their pet and make use of some tamper-proof security. Highly recommended.