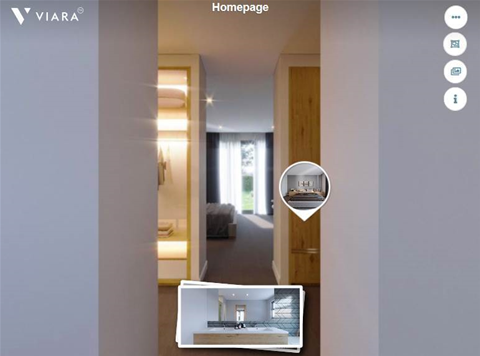 "Virtual reality for real estate is becoming a thing," said Chris Farace, the founder of Australian startup Viara, which has created VR software for property developers and agents.

The idea behind Viara came to Farace when he was working for a web and app developer in New York that had a startup involved in the real estate sector.

"No-one was born in New York City... so there is a big demand for apartments," but people find it hard to visualise interiors without actually visiting them.

So Farace found himself wondering "how do I help people see inside buildings?" Technology to take 360-degree images and present a virtual interior view already existed, so he returned to Australia, bought one of the first Manifold cameras (the market leader in virtual reality for real estate, he said) in the country, and set to work producing VR views of homes.

But the real estate agents he was working with wanted a way to do something similar for off-the-plan sales.

Farace realised that just as a number of photographs can be stitched together to form panoramas, multiple renderings of 3D models could be processed the same way and presented in virtual reality.

Working with an architect and 3D modeller, in late 2016 he created a 3D VR representation of the renovations planned for his parents' house.

This gave him something to show local real estate developers who liked the idea and became his first clients. He also got the attention of a major serviced office company that wanted a way to show potential tenants what its new premises would look like before they had actually been completed.

As software to do all this didn't exist, Farace started work on what became Viara – a system designed specifically to create and present onscreen and VR walkthroughs of off-the-plan properties.

The software has been in development for around a year, and the beta version has nearly 500 users a day. "No-one else has been able to offer the [same] quality," he claimed.

A demo is available on Viara’s website, about half-way down the page.

Farace expects 360-degree virtual reality views to be a normal part of off-the-plan sales by the end of next year. The sense of "being there" has an emotional impact, he said, but it is important that the model is delivered at sufficiently high quality for it to look real.

Vendors benefit from quicker sales and better prices, while vendors can see what they are getting, he observed. And as bank lending has slowed, developers need a way to sell a larger proportion of the units so they can get the funding needed to proceed with the project.

While Viara supports immersive 3D, "the world's still on its way there" and most people prefer to hold up an iPad as a window into the model and then move it around to view the planned premises from different angles. This also makes the models accessible from potential buyers' homes, not just in sales offices.