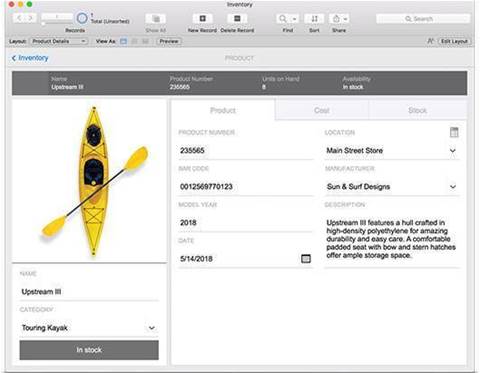 The latest version of the application creation tool has enhancements for both non-experts and developers.

Can’t find business software that’s suitable for you? It is possible to create your own, as we explained in our case study on juice maker Summer Snow, which used FileMaker to create its own suite of custom applications.

Now there’s a new version of the database development platform, FileMaker Pro 17 Advanced, which comes with half a dozen starter apps designed to give users worthwhile functionality in a form that can be easily understood and extended by non-expert developers.

In particular, the starter apps make it easy to add more data tables without requiring an understanding of relational database schemas.

Furthermore, master-detail layouts simplify the creation of apps to display hierarchical data, such as the names and details of contacts at a business's customers, or the options available for each of its services.

The FileMaker Data API introduced on a test basis in FileMaker 16 is a fully-supported feature in version 17. This provides a standardised way for web-based applications to read or write FileMaker data, including the ability to load files into a FileMaker container field.

Changes to FileMaker Go (for iOS) include access to a wide range of device sensors including the barometer and accelerometer; drag-and-drop support for text, photos and files; and locally generated notifications (based, for example, on location) even if FileMaker Go isn't actually running.

Perpetual licences of FileMaker Server only include upgrades during the first year. Annual licensees receive all upgrades for as long as they subscribe.