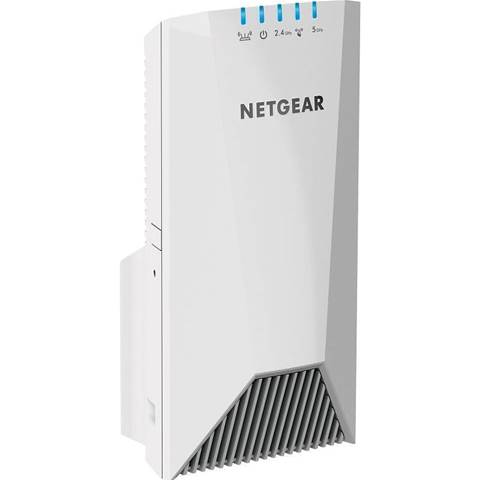 A new Nighthawk product can boost your Wi-Fi coverage and speed without you having to invest in a whole new system.

Mesh Wi-Fi systems such as Netgear’s Orbi have become popular due to the way they use multiple access points to improve the wireless coverage and performance, but until now they’ve been complete systems comprising a router and one or more satellite units.

Netgear’s latest Nighthawk product, however, can extend an existing Wi-Fi network, giving the benefits of mesh networking without having to replace any of the equipment that's already installed, and without having to change the Wi-Fi settings on individual devices.

The Nighthawk X4S Wall-Plug AC2200 Tri-band WiFi Range Extender with FastLane3 and Smart Roaming (EX7500) (pause for breath!) connects wirelessly to your existing router or modem/router, providing greater coverage as well as higher speeds for devices that are further away from the original router.

A single SSID and password can be used for the combined network so devices remain connected as they move around the premises, regardless of whether they connect on a 2.4GHz or 5GHz band.

Using multiple bands means that unlike traditional extenders the EX7500 doesn't reduce the speed available to individual device, according to Netgear: “It provides up to 100 percent faster Wi-Fi as compared to traditional dual-band Wi-Fi extenders.”

The smart roaming feature means devices supporting the 802.11k standard (such as recent iPhones, iPads and Samsung Galaxy phones, to mention a few) quickly and automatically connect to the best available signal.

The EX7500 can cover an additional area of up to 138 square metres and sets up with a push of a button. Multiple units can be combined to extend the signal throughout larger premises.

The ability to connect to any existing Wi-Fi router or modem/router is particularly convenient where a provider insists on its customers using the device it supplies. This is notably the case where VoIP and internet services are provided as a bundle, although not all providers take that draconian step.

Last year, Netgear announced the EX8000, a similar though somewhat faster (AC3000 vs AC2200) desktop extender with four Gigabit Ethernet ports, but it is apparently not yet available in Australia. The $279 EX7500 is available here, however.