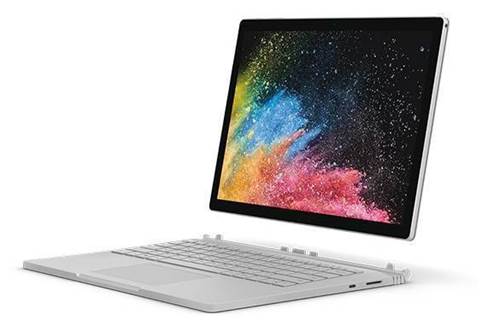 The updated range includes a 15in model and eighth-generation Intel processor, but it's not all good news.

Microsoft has just taken the wraps off the Surface Book 2, the second generation of its powerful premium notebook, featuring an eight-generation Intel processor and a new larger size.

Launched two years ago as a first-party Microsoft alternative to the MacBook Pro, the Surface Book gained popularity among Windows fans for its powerful hardware, gorgeous screen and attractive design. But unlike Apple’s laptops, it’s also a hybrid – push a button on the keyboard and the screen detaches, becoming a tablet.

The company has now produced a brand-new successor to the original Surface Book, with refreshed hardware and a couple of key design changes to tempt fans.

The good news is that the Surface Book 2 is available in a 15-inch model, in addition to the original 13in version. This 15in version will be a particular boon to creatives who want a larger canvas to work on.

Microsoft has also finally seen the light and added a USB-C port to one of its Surface devices, in addition to a SD card reader and two USB 3.0 ports. There's a downside, though – it doesn't support the Thunderbolt 3 standard, which means it only has a 5Gbps data transfer rate as opposed to 40Gbps, and while it can supply the Surface Book 2 with power, it can't be used to connect an external monitor.

This is a real shame, particularly as the USB-C port has replaced the old Surface Book's Mini DisplayPort. If you want to connect the newer mode to an external display, you'll have to shell out for Microsoft's Surface Dock, which the company was selling for almost $300 at time of writing.

Otherwise, there haven't been many changes to the exterior. The 13in model is almost the same weight and thickness as the first-generation Surface Book, and the design hasn't changed. It's still got a matte silver magnesium chassis, with a detachable screen and a segmented hinge.

Internally, however, there's a different story. The Surface Book 2 is fitted with an eight-generation Intel Core i7 chip and either 8GB or 16GB of RAM, which should make it lightning-fast. In fact, Microsoft claims that the new Surface Book is four times more powerful than its predecessor. The 13in version is also available with a Core i5 processor – although this is limited to a seventh-generation version.

Like the previous iteration, the Surface Book 2 comes with an optional Nvidia graphics processor – the GTX 1050 with 2GB of VRAM for the 13.5in model or a GTX 1060 with 6GB of VRAM with the 15in version. This promises plenty of rendering capabilities for photo and video editing work, as well as 3D modelling and CAD tasks.

That's not the only benefit for creative professionals, as the Surface Book 2 looks set to continue the Surface range's reputation for superb displays. The touchscreen PixelSense display promises a 1600:1 contrast ratio and a resolution of 3000 x 2000 pixels or 3240 x 2160 pixels for the 13in and 15in variants respectively – both in the Surface range's trademark 3:2 resolution. They also support the Surface Pen and Surface Dial for increased interaction and control options.

“As a team, we believe that products are a reflection of the people who make them, and the people who use them,” says Microsoft's head of devices, Panos Panay, in a blog post announcing the new device. “We put our heart and soul into building a laptop of the future, for people who want to create the future – creators who see no limits, data scientists designing deep neural networks, engineers, architects, movie makers, and gamers. Surface Book 2 is a tool for everyone who wants to achieve more.”

The Surface Book 2 will be available for pre-order starting 9 November, hitting stores a week later.

The bad news is that while the 13.5in version will be available in Australia at launch, the 15in model will be US-only for the time being.