Hands-on with the Samsung Galaxy Note 8 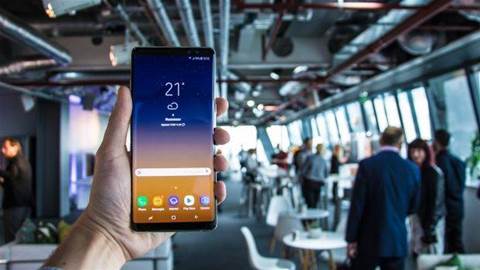 Samsung's new high-end smartphone looks to be the perfect business companion – as long as it can keep its cool.

Samsung is positioning the Galaxy Note series for a comeback. After the Note 7's public and fiery failure, a successor looked like an unlikely proposition, but the Note 8 has now arrived to prove the naysayers wrong.

But the Note 8 has got an awful lot to prove. As the first phone to follow the disastrous Note 7, it not only has to repair the Note brand's tarnished reputation, but it also has to live up to what was (before it started detonating) one of the best phones of 2016.

Thankfully, Samsung appears to have met this challenge head-on. If you've been following Samsung's last few generations of smartphones, you probably won't be all that surprised to learn that the Note 8 is basically just a souped-up version of the Samsung Galaxy S8. That's the strategy the company used for the Galaxy Note 7, and it's the same strategy the company's using here. 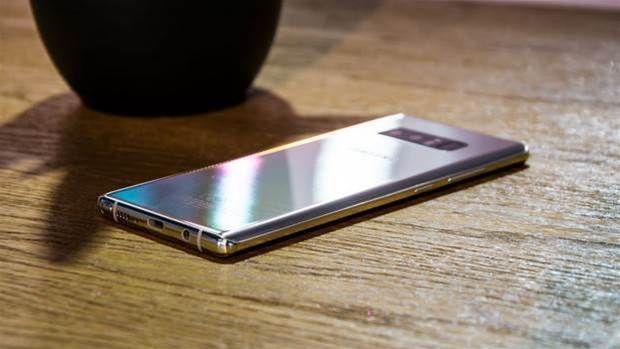 It's hard to argue with, though – Samsung has taken the best bits of the Galaxy S8, and added in all the features that made us love the Note range. It's got the Galaxy S8's jaw-dropping edge-to-edge Infinity Display, the Note series' signature built-in stylus, and even a few brand new tricks for good measure.

First of all, the Note 8 is one hell of a looker – it uses the same virtually bezel-free design as the Galaxy S8, so it's basically one big, beautiful slab of pixels, with the gorgeous curved-edge screen dominating the phone's body.

The screen itself is a 6.3in AMOLED panel with mobile HDR and 1,440 x 2,960-pixel resolution that equates to an incredibly sharp 522ppi. True to form, the display looks stunning, with rich colours, strong contrast and nearly unbeatable picture quality.

At 8.6mm thick and weighing 195g, the Note 8 is fractionally thicker and heavier than its predecessor, but given all the extra tech that's packed into that space, it's a hard thing to complain about. It has a much more squared-off design than the S8, and it's larger than both the S8 and the S8+.

That's bad news for its pocketability, but it does give you a bit more space to work with, which is something that Note users have always cherished. And it has much the same tall-screen form factor as the Galaxy S8+ so, although it’s a 6.3in screen, you can still hold the phone in one hand. 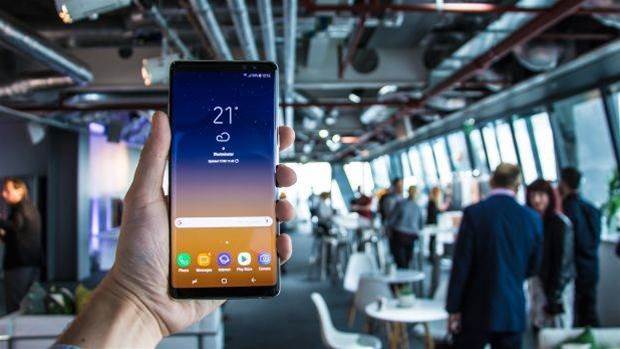 All that extra space will come in handy when you're using the Note 8's built-in S Pen stylus, which makes a return. There have been some subtle under-the-hood improvements, including a finer nib and increased pressure sensitivity, but it's largely unchanged from the sterling peripheral we saw on the Note 7. Samsung has also made some changes to the various companion apps that go with the S Pen, including adding new features to the Live Message, translation and memo software.

Speaking of under-the-hood upgrades, it doesn't look like Samsung is scrimping on the Note 8's performance, either. The company has been cagey about which exact processor it's using, and has only revealed that it uses a 10nm architecture. What this means is that in all likelihood, the Note 8 will use the same processor as the S8 – Samsung’s own Exynos 8895 in Australia and Europe, and a Qualcomm Snapdragon 835 in the US and elsewhere.

It has, however, bumped the RAM up to 6GB, which should power the Note 8 to some seriously heavyweight benchmark scores. The S8 was one of the best-performing phones we've ever tested, and we'd be surprised if this wasn't at least as impressive, if not more so. Multi-tasking is set to be a particular strong suit, as Samsung has introduced an 'App Pair' feature, which allows users to launch two complementary apps simultaneously, such as Instagram and Google Photos. 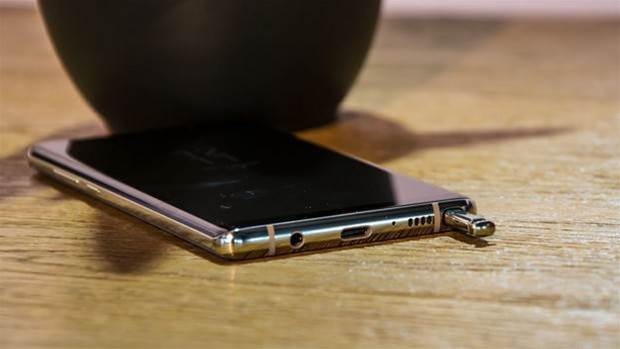 All the common Samsung flagship features are present and correct for the Note 8: IP68-rated water resistance, wireless fast-charging and expandable storage to supplement the 64GB onboard allocation. There's also a slew of biometric security features, including a rear-mounted fingerprint reader, facial recognition and an iris scanner.

After what happened with the Note 7, Samsung made a huge point of mentioning the eight-point battery safety test that it put the Galaxy S8 through when it launched, and the Note 8 is no different. The company is keen to emphasise how rigorously it's tested the Note 8's safety, and is trying to put its previous woes far behind it.

The 3,300mAh battery falls between the S8 and the S8 Plus in terms of size, but given that it's powering a larger display than both devices, we'd expect to see a battery life roughly on par with the former. As with all Samsung's premium flagships, it will be compatible with the company's adaptive fast-charging, and will charge via USB-C.

Its support for USB-C means that it's also compatible with DeX, Samsung's business-focused solution that effectively turns the phone into a desktop computer. This is great news for enterprise customers, as it gives them a wider variety of devices to choose from and indicates that the company isn't planning to stop supporting DeX any time soon. DeX itself is getting an upgrade or two in the form of some new software partners (including Citrix's GoToMeeting).

Aside from adopting the Infinity Display, the other major change that Samsung has made with the Note 8 is the addition of a dual-lens camera. This marks the first time the company has used this technology, which has become the norm on flagship smartphones. The setup twins a f/1.7 wide-angle lens with an f/2.4 telephoto lens with 10x optical zoom. Both use a 12-megapixel sensor, and both feature optical image stabilisation. 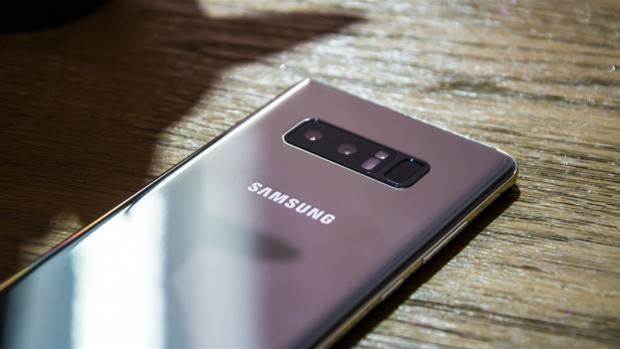 Just like the S8, Samsung has packed the camera with technology, and the result is some seriously impressive shots. Not only are images crisp and stuffed with fine details, there are also cool features like slow-motion and dual-capture modes.

The Galaxy Note 8 – like virtually every phone Samsung releases – is one of the best in its category. It's gorgeous, exquisitely designed, and looks set to be among the most powerful mobile devices on the face of the planet.

Bear in mind, though, that with these professional-grade capabilities comes a decidedly professional-grade price. Priced at a hefty $1,499, it's more expensive than the Galaxy S8 ($1,199), Galaxy S8 Plus ($1,349) and the 128GB iPhone Plus ($1,419). But then again, you're getting one of the best business smartphones money can buy.

The Galaxy Note 8 will be available for pre-order from Samsung, various telcos and retailers from 25 August, and if you pre-order before 22 September, you can get a free wireless charger worth $119. 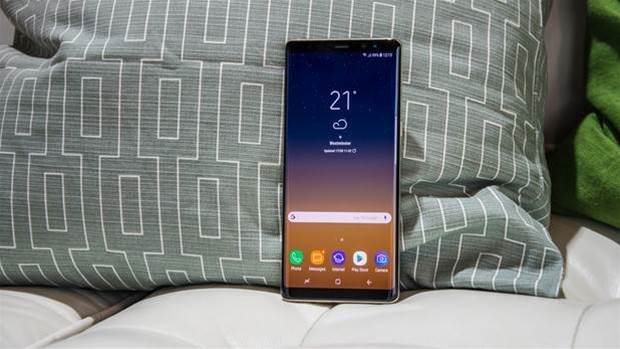 At the time of writing only Vodafone had released details of Galaxy Note 8 plans, with “interest-free” handset repayments starting at $41.63 per month over 36 months, plus its cheapest Red Plan (with 3GB of data), for a total of $69.63 per month. Vodafone is also offering a trade-in bonus credit of at least $100 in addition to the actual trade-in price. We’ll add plan details from the other providers as they come to hand.

We'll have a full review of the Note 8 when we've spent more time with the device, but our early impression is very favourable. If you're an on-the-go professional, the Note 8 looks fully set to be your perfect business companion – as long as it can keep its cool.

This article originally appeared IT Pro.