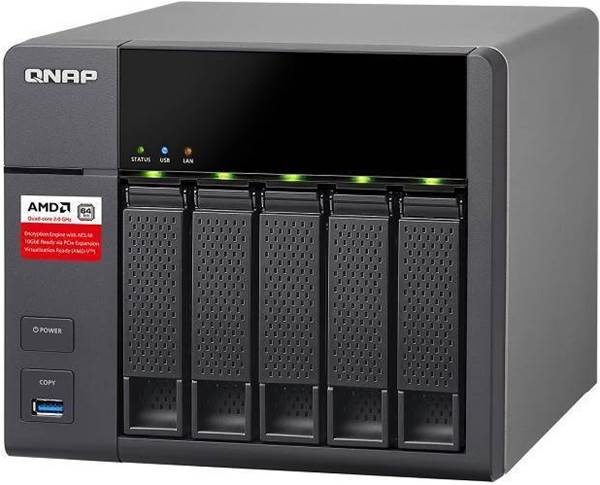 Looking for an affordable network attached storage device that will grow with your business? The Qnap TS-563 won't disappoint.

Qnap’s TS-563 is a network attached storage device that means business: it’s powered by a quad-core 2GHz AMD processor, and its five internal bays can be supplemented with up to 21 drives over USB 3, using Qnap’s UX disk enclosures. What’s more, even though it comes with four Gigabit Ethernet ports, it can be upgraded to 10GbE via a PCI Express option.

You can buy it with 2GB or 8GB of DDR3L RAM – we reviewed the latter. For ambitious tasks this can be easily expanded to 16GB, since a spare SODIMM slot resides on the outer side of the motherboard.

Qnap’s quick-start cloud portal makes installation a breeze: simply enter the model and type in the unique cloud key from the label, then register the appliance with a myQNAPcloud account. This online- friendly approach is also visible in cloud backup: the OpenStack Swift app supports big cloud storage providers such as HP Cloud, IBM SoftLayer and Rackspace.

We had no problem using the S3 Plus app with an Amazon Web Services account, nor with the Glacier app. The new Cloud Drive Sync app also handles Dropbox and Google Drive. We tested using the former, linking it to our account and setting up a continuous  sync schedule across selected local and cloud folders. It’s also easy to set up the TS-563 as a private cloud: we linked the Windows desktop app to the appliance and then defined sets of paired folders for real-time file syncing.

When it comes to speed, the TS-563 is a mean performer. We tested with four 4TB WD Red drives, configured in a RAID5 array. Over Gigabit, we were able to drag and drop copies of a 50GB test file at sustained read and write speeds of 113MB/sec and 112MB/sec. Our 22.4GB backup test folder, with its 10,500 small files, was also dealt  with efficiently, copying across at  an average of 87MB/sec.

For 10GbE testing, we fitted an Emulex dual-port card in the TS-563 using the proprietary bracket, and saw Iometer report raw read and write NAS speeds of 772MB/sec and 441MB/sec. Real-world performance was more modest, with our 50GB file copy completing at read and write speeds of 415MB/sec and 210MB/sec. Our backup test didn’t see a huge improvement, with the speed increasing to only 130MB/sec.

Qnap’s QTS 4.2 operating system offers a powerful web console with a file manager that gives direct access to the contents of your Dropbox and Google Drive cloud storage.

The Q’center app provides slick centralised management of all your QNAP boxes – with customisable dashboards – and Qsync performance has also been improved. It’s possible to back up Gmail accounts, Virtualization Station 2 adds a virtual switch, and Qsirch offers text-based searches to quickly locate files on the appliance.

We’ve always liked Qnap’s Virtualization Station app, which lets the appliance run a full desktop or server OS inside a virtual machine. We created a medium-sized VM using the wizard and installed Windows Server 2012 R2 from an ISO file on the appliance in less than 15 minutes.

With this done, we could access the VM and its Windows OS directly from the app’s console or via Remote Desktop Protocol. However, the TS-563 doesn’t have an HDMI port, so you can’t use it directly as a PC.

We’ve seen the Qnap TS-563 selling for around $805 for the 2GB RAM version without disks, $996 for the 8GB version, and around $1,480 for the 8GB version with five Seagate 1TB IronWolf NAS drives. That’s great value in its own right, and even more so when you factor in the bonus of being 10GbE-ready. Even if performance over 10GbE isn’t always a huge leap over Gigabit, it’s no slouch.