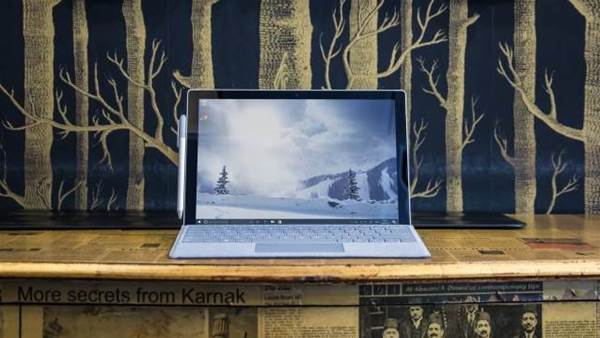 It may not be a huge upgrade over the Surface Pro 4, but our benchmark tests revealed one very pleasant surprise.

That’s possibly down to how people used previous Surface Pros in the real world. When you see one in public, you’ll almost always see it being used with the Type Cover attached, like a regular laptop. Occasionally you’ll see someone bring out the pen to mark up a PDF or sketch something. But most of the time there’s typing going on.

And that won’t change anytime soon. In fact, if you’ve seen the Surface Pro 3 or 4, you won’t notice much difference with the 2017 Surface Pro. Design-wise, there’s very little difference between them and you’d be hard-pressed to spot the differences if you put them side by side. The “PixelSense” screen is the same size (12.3 inches across the diagonal), adopts the same practical 3:2 aspect ratio as before and has the same resolution – 2,736 x 1,824 pixels.

It performs just as well, too, reaching 442cd/m2 maximum brightness and delivering a cracking contrast ratio of 1,297:1 for solid, pleasing onscreen imagery. Colour accuracy is superb as well, with no particular weaknesses and an average Delta E of 1.26, which is superb. (Delta E is a measure of the inaccuracy of a display’s representation of various colours is, so the lower the score, the better.)

One change that was expected by some but hasn’t made an appearance is USB Type-C support. The Surface Pro has the same ports as its predecessor: mini-DisplayPort, USB, and the Surface connector for power. This feels short-sighted, although Microsoft devices chief Panos Panay’s quip that USB Type-C is currently “for people who like dongles” is true enough. As with previous versions of Surface Pro, what you get in the box is just a tablet. You’ll need to pay extra to get the Surface Type Cover and, now, the Surface Pen, which previously came in the box with all but the cheapest model.

The Type Cover is now a good keyboard in its own right, with keys that have a positive click to them and a small but perfectly usable and responsive touchpad.

The hinge has changed a little, though. It’s now like the hinge on the Surface Studio and can be pushed down to an almost-flat 165 degrees, which is a comfortable angle for drawing. You might think this would make it easier to break as you lean on it more, but I had a decent go at pushing it down hard (sorry Microsoft) and it took the weight happily. I wouldn’t jump on it, or sit on it, but it’s robust.

The Surface Pen has had a good upgrade, too, now supporting tilt in the same way Apple’s Pencil does. This means you get a much more pencil-like experience when doing things such as shading. It’s also had its response time improved – down to 21ms – which should mean most people will never spot any lag.

Pressure sensitivity has been increased to 4,096 levels alongside a 12g activation force that means you can press harder on screen. Microsoft claims this is enabled by some particularly smart technology: effectively, the Surface Pen communicates directly with the Surface Pro’s screen hardware to draw. This obviously works with Microsoft’s own applications, but it’s also available via an API for developers to build in support for their own software.

The strengths and weaknesses of the Surface Pro form factor remain the same as always. This isn’t a device you’ll use on your lap a lot unless you have unusually long thighs. At 5ft 8in and on the stumpy side trying to put the Surface Pro on my lap at any angle other than almost vertical is impossible.

What this means in practice is that the Surface Pro will be more than good enough for everyone except the most demanding of users. If you are thinking of doing CAD/CAM work on it, you’ll need to go for the top spec, but a Core i5 version will be fine for most users.

And, whichever version you’re using, you’ll be able to use it all day without plugging in the power. In our battery benchmark, the Surface Pro lasted 11 hours 33 minutes, which is one of the best scores we’ve seen for a seventh-generation (Kaby Lake) Intel Core i7-based machine, and a huge improvement over the 5 hours 56 minutes we got in the same test for the Surface Pro 4.

Microsoft has made a genuine all-day machine here, which is great.

So, if you add in the cost of the Signature Type Cover, you could buy a similarly specified Dell XPS 13 for around $1,000 less. That’s without a touchscreen, pen support and so on, but if you’re looking for something that will primarily be a laptop, it’s a better deal. 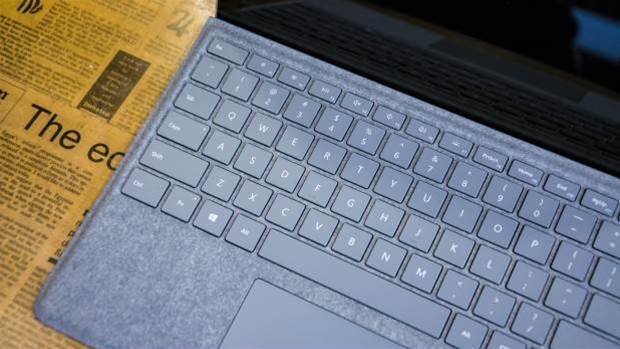 We’ve used the Surface Pro series since the third generation, and there’s no doubt this Surface Pro is the best one yet. It has good performance and great battery life and, because it’s both a tablet and a laptop, it’s a very versatile machine.

The Surface Pro is facing increasing competition – including from Microsoft’s own Surface Book and Laptop – but if you want that versatility, the Surface Pro is still the best device around.