How fragile is the Samsung Galaxy S8? 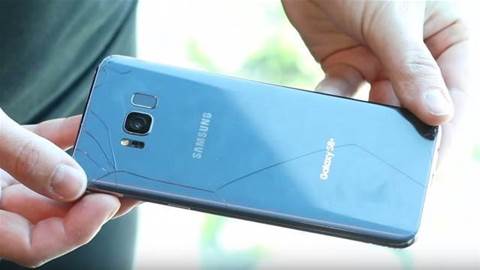 The S8 is superior to the S7 in every way, except in its ability to handle a fall, according to recent drop testing.

They just don’t make phones like they used to. Today’s smartphones – particularly high-end models – use lots of glass and that’s a material that just isn’t built for butter-fingered humans.

Even those phones, like the Samsung Galaxy S8, that use latest type of toughened Gorilla Glass, can’t be expected to survive falls like, say, the old indestructible Nokia feature phones.

On the plus side, the Galaxy S8 is simply stunning, and sports more glass than ever before, with a screen to bezel ratio of around 84%. But according to recent drop tests, you’re probably going to want to get a case.

US gadget insurer SquareTrade has put the Galaxy S8 and S8 Plus through its notoriously tough handset torture chambers. The result? A pair of handsets considerably more fragile than their predecessors.

Just a single face-down fall is enough to result in cracks in the screen, and those smooth edges are just inviting chunks of glass to go missing, too. The glass on the rear of the devices didn’t fare much better, succumbing to that glorious spidering effect when dropped on the side and back.

SquareTrade describes the phones as faring “significantly worse than their predecessors”. What is good to know is that the water test was a complete success: after being submerged in five feet of water for 30 minutes, both the S8 and S8 Plus continued to function fine, and even the slight sound muffling that was evident vanished after another half hour on terra firma.

“While the nearly all-glass design of the S8 makes it a beautiful phone, it's extremely susceptible to cracking when dropped from any angle,” said SquareTrade’s vice president global creative director Jason Siciliano. “However, we have no doubt it's going to be a hit. We found that 89% of Samsung owners reported having a positive view of the brand despite recent controversies, and 36% plan on buying an S8 in the next six months. Just don't drop it.”