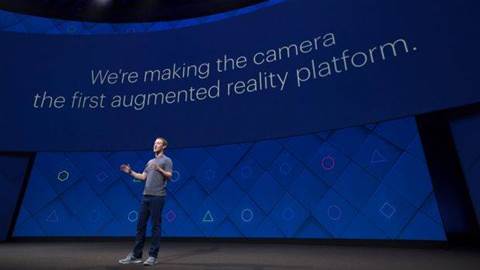 The social media giant has revealed how it will add virtual and augmented reality technologies to the platform.

Facebook has unveiled its plans for VR and AR, including new Snapchat-style camera features, which will enable individuals and businesses to create new, immersive experiences for followers.

Speaking at the company's recent F8 developer conference, Facebook CEO Mark Zuckerberg (pictured above) revealed new technologies designed to take advantage of the boom in augmented reality tech. These are primarily centred around the Facebook Camera, with examples like interactive filters and animated masks.

"Over time, I do think that this is going to be a really important technology that changes how we use our phones, and eventually all of technology," he said during his keynote.

However, he warned the technology would take a while to reach its full maturity, saying "it'll take a while for this to develop. Experiences are not going to change dramatically overnight".

AR technology, which overlays digital images onto the real world, has been popularised primarily by Snapchat, which features a variety of animated effects. It's been adopted with particular interest by marketers and advertisers, who are looking to take advantage of its high usage within the coveted 'millennial' demographic.

The company also took the wraps off a new social virtual reality environment, called Facebook Spaces. The shared virtual experience allows you to hang out with digital avatars of your friends, relive memories on Facebook and watch 360-degree videos together. It also supports Facebook Messenger, meaning your friends can get involved even if they don't have VR headsets.

The new products are part of Facebook's effort to further establish social VR and AR as a key part of its platform, which it hopes will prompt new growth and continued engagement within its userbase.