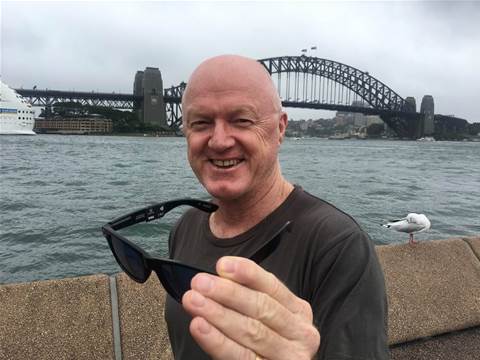 How Inamo’s contactless payment platform was conceived, and then adopted by the credit card giant.

Visa's WaveShades – sunglasses with a contactless payment chip attached to one arm – were piloted at the Laneway music festivals in Australia this summer, and more recently at the South by Southwest Festival in the US.

Some banks and other financial institutions have been offering contactless payment stickers for some time, with the intention that they are attached to phones that lack NFC payment capability (or where the phone vendor doesn't provide access to the NFC capability on terms the banks consider acceptable).

But last year, Peter Colbert (pictured above with WaveShades) had been surfing at Manly. “It was my turn to pay for a round of coffees with friends and I realised I didn’t have any wallet or cash to pay,” he said. “I had a light bulb moment and thought ‘wouldn't it be great if I could go surfing, even go for a run or bike ride and not have to carry my wallet or mobile phone’.”

So he developed the Inamo Curl, a waterproof contactless payment wearable that could be attached to watch and fitness bands, or to key rings.

The same chip is used in the WaveShades sunglasses. And the sunglasses themselves were designed in Australia by Local Supply.

"I'm really proud as an Aussie startup that Visa chose our payment platform to promote their WaveShades sunglasses at such a prestigious event like SXSW,” said Colbert.

The Curl – and by extension the WaveShades – work as a prepaid debit card, so if the device is lost or stolen the maximum financial loss is limited to the amount loaded, which can be no more than $1000. It's possible to disable the account via the web to prevent transactions.

Colbert’s startup Inamo was a founding resident of the Stone & Chalk fintech incubator based in Sydney.