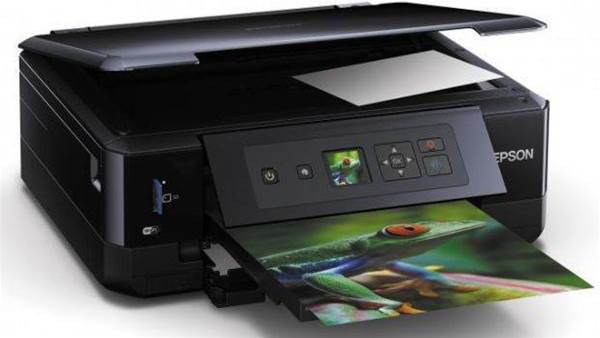 Looking for a budget multifunction printer that produces good photos and prints? Epson's XP-530 could be worth considering.

The XP-530 is the cheapest model in Epson's Expression Premium range of inkjet multifunction printers (MFPs). Geared toward creative users, it uses Epson's five-ink engine, which combines a pigment-based black for text printing, with dye-based black, cyan, magenta and yellow inks for graphics and photos.

You can share the Expression Premium XP-530 via a wireless network, print from or scan to an inserted SD memory card, print from iPhones and Android devices, and print automatically on both sides of a sheet of paper (duplex printing), although there's no fax modem.

On first impressions, 'Premium' isn't a word we'd use for the XP-530. It looks smart enough, with a squat stance and shiny black plastics, but its control panel features one of the smallest colour screens we've seen recently – a 3.7cm panel which looks like it belongs in a camera viewfinder.

It's paired with four-way navigation and an OK switch, and at the highest, icon-based level it works fine. Dive into sub-menus, however, and there's only room for it to display one option at a time, meaning you'll often have to scroll to find what you want. Entering our Wi-Fi password was difficult, but the MFP does also support the simplified Wi-Fi Protected Setup (WPS) process. We should note that the screen was very quick to preview photos on an SD card.

While it looks like there's an input tray folded up the rear, in fact you load paper in a 100-sheet tray slung underneath – and we found it fiddly to re-stock this without knocking the output tray above it: on more than one occasion the printer nagged me to extend it properly again.

Fortunately, things quickly improve when you start using the XP-530. For a start, it's an incredibly quick colour printer at this price, spitting out 6x4in colour photos in around a minute each, and despatching our colour graphics test at 6.4 pages per minute (ppm) – more than 50% quicker than we'd expect. Its black text speed of 9.0ppm is less impressive, but switching to draft quality produced faint but acceptable results at 16.3ppm. A single, black A4 photocopy took 16 seconds, while a colour copy took 24 seconds.

The scanner was similarly quick, needing just 10 seconds to preview an A4 page or to capture it at 150 dots per inch (dpi). Capturing a 6x4" photo at 600dpi took just 25 seconds, but repeating the job at 1,200dpi was slow, at two minutes and 16 seconds.

While we've seen sharper results, the XP-530 captured colours faithfully, and were able to distinguish the full range of shades in our tests. Print quality was impressive, with crisp black text and vivid colour graphics on plain paper, and natural, detailed photos on coated papers. While not a match for Epson's more expensive six-ink printers, pictures were comparable to those from five-ink Canon printers.

Those after an economical printer for a busy office should look elsewhere, because the XP-530’s running costs are typical of an entry-level printer aimed at homes and very small offices. Each of the five standard cartridges costs $20.99, while high-yield cartridges cost $33.99 each. The latter would seem to be worth the extra cost, with Epson rating the high-yield cartridges at approximately 500 pages for standard black printing, 650 pages for colour composite, and 400 photos with the Photo Black tank – in each case at least twice as long as the standard tanks.

But overall, the Epson Expression XP-530 offers impressive speed and quality for a budget printer. It's let down somewhat by its minute preview screen, but otherwise it's an excellent all-rounder.