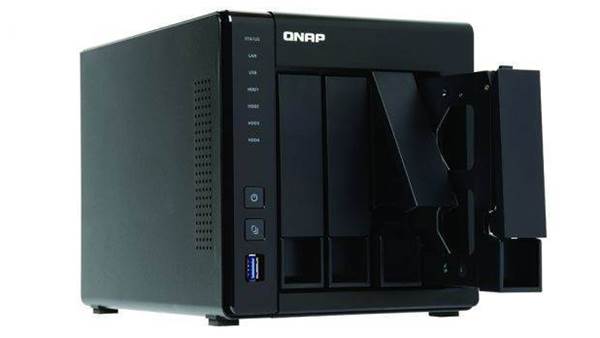 Looking for a network attached storage device with plenty of capacity, speed and features? The Qnap TS-451+ may be just what you’re after.

It says something when NAS drives pack processors more commonly associated with laptops. While the Qnap TS-451+ doesn't have one of Intel's latest processors inside, there's nothing slow about its Celeron J1900 Bay Trail processor – running at 2GHz with a 2.4GHz burst speed, and partnered with 2GB of DDR3 RAM, it's primed for performance.

And so it proved in our test. The Qnap hit average speeds of 107MB/sec when transferring meaty 4K video files, dropping down to 105MB/sec when writing. Even the small file tests that leave other NAS struggling didn't faze it, with its 46.6MB/sec write and 42.9MB/sec read speeds comfortably the fastest on test.

There's more to this hefty four-bay NAS than performance, too. For a start, it's easy to get going. The drives install into solid pull-out caddies – you'll need to screw them into place – and these slip back into the unit with a satisfying click. Each drive has a label stuck to the side complete with QR code and nine-digit number; either scan the code or type the digits into the Qnap site, and the browser-based routine will do the rest. Alternatively, use Qnap's Qfinder Pro utility over the network to do the same job.

The setup routine makes it pretty clear that the TS-451+ targets more expert users, with the upside being that options to set up a static network connection or configure the basic services are front and centre. It offers plenty of RAID (redundant array of independent disks) options for performance, redundancy or both, in RAID0, 1, 5, 6, 10 and JBOD configurations. You can also enable 256-bit AES encryption on volumes, and the whole setup process is logical and thorough.

Sure, there's a strong Linux feel to the desktop-style interface, but it makes it easy to find and install add-on apps or check the status of the disks and hardware. If you like reports and detailed status screens, the TS-451+ is NAS nirvana. You can even change the photo and welcome message on the login screen.

Qnap was one of the first NAS manufacturers to push cloud-like features, and its Qsync module allows you to synchronise a Dropbox-style folder between the NAS and multiple PCs. The look and feel isn't quite as slick as Western Digital or Netgear's equivalents, but all the functionality is there, with files syncing quickly when added or modified.

You can also access files on the NAS from your iOS or Android smartphone using the Qfile app, or manage many of the core features using another app, Qmanager. Meanwhile, the TS-451+ will happily work in tandem with a wide range of cloud services, including Amazon Cloud Drive, OneDrive, Google Drive, Box and Dropbox.

A rich app library enables you to use the TS-451+ to download torrents, handle backups, serve Wikis, WordPress, Drupal and Joomla sites, or operate as a VPN or email server. You can also configure Plex or TwonkyMedia media servers, then use the TS-451+ as a Kodi media player. Not only does it have the requisite HDMI output, but also a bundled remote control.

It proved effective as a media server and player in our tests, and can transcode 1080p and 4K video files on the fly for streaming to tablets or smartphones. While a good wireless connection at the device end is vital for smooth, artefact-free playback, the results are generally impressive.

Qnap's claims that the TS-451+ can moonlight as a virtualisation platform or a PC might be a little ambitious – this is a Celeron-based NAS, not a Core i5 or Xeon server – but it has strong iSCSI support and it all goes to show just how versatile this NAS can be. Naturally, it still handles standard NAS tasks such as backup, either through Qnap's own rather basic NetBak Replicator app or Apple's Time Machine.

This is a big and sometimes intimidating NAS, with lots of options and high-end features, excellent connectivity and server-room, not living-room, style. It's also quiet, easy to manage and well thought out. If you don't need four bays, the two-bay Qnap TS-251+ offers you the same features and specifications, with half the capacity for around $190 less. If you do, this is the leader in its class.