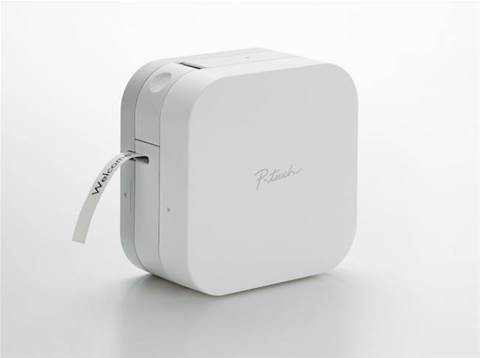 We review Brother's PT-P300BT, which is designed to be used with smartphones and tablets.

Unlike Brother's previous labellers, the PT-P300BT is specifically designed for use with Android and iOS phones and tablets. It only has a Bluetooth interface, and it's only supported by Brother's free P-Touch Design&Print app.

That simplicity keeps the price down to an affordable $79 (whereas the cheapest computer-connectable Brother model is the $99 PT-1230PC), and helps achieve the compact size (115x115x61mm) and weight (380 grams excluding tape and batteries).

The PT-P300BT requires six alkaline or rechargeable Ni-MH AAA cells. To save power, the labeller switches itself off after idling for 10 minutes. A $62 plugpack mains adaptor is available as an option. If that sounds a lot, it's less than six sets of Duracell batteries.

One downside of the small size is that it only prints labels between 3.5 and 12mm wide, even though Brother's range extends to 36mm wide. It would be good to have the flexibility to print wider labels – for example, if you were an electrician wanting to print labels to show an appliance has been tested – but 12mm is fine for most of the office applications we could think of, as well as many home uses such as labelling containers in the kitchen or garage.

The review unit came with the standard sample cartridge of black on white tape. Brother's TZe family uses a thermal process, so the only consumable is the tape. It wasn't practical to perform a long-term trial, though we can report that the smooth and glossy tape resisted fingernail damage but puckered slightly when we attacked it with the edge of a coin. And we can't say whether this would be true after labels had been in place for several months, but they did peel cleanly when we tried removing them from smooth surfaces.

Unlike some self-adhesive products, it's easy to separate the backing paper when attaching Brother's labels – curl the long edges together slightly, and a longitudinal slit in the paper opens up so you can peel it off without having to wrestle with an edge to get a start.

Brother claims a print speed of 20mm per second, but that doesn't include the time taken to transmit the data from the device and you also need to allow for the 15mm of tape added by default to make sure the (manual) cutter doesn't chop off part of the label. Still, the effective speed is perfectly adequate considering the maximum label length is 300mm.

Tape prices start around $23, and in some cases you can save a dollar or two by buying twin packs. The 12mm black on white tape that we tested costs $30.95 for an 8m cartridge. So if your labels are on average 5cm long, then allowing for the wastage mentioned above that works out at about 25c per label.

We tried the P-Touch Design&Print app on an iPad (it's designed for iPhone so it doesn't make the best use of the larger screen) and an Android phone. There's a selection of generally pleasing templates to which you can add your own text, or you can start from scratch and design a label with no more than one piece of text and a maximum of three symbols.

Twenty-three fonts are available, and the symbol library is wide-ranging, including emoji, office equipment, tools and warning symbols.

The app was generally straightforward, although curiously, it won't work without an internet connection. And we had one issue that had us stumped until we checked with Brother. When using the templates, longer text (such as "Self-Raising Flour" rather than "Flour") came out smaller than expected, even though the tape length was set to Auto. It turned out that many of the templates are set up to print labels of a particular length, regardless of content. So if the text is too long to fit at the specified size, it is automatically scaled down. When using the "Create your own label" option instead of a template, the Auto setting does work as we expected – that is, the length of the tape is extended to suit the content.

This is largely a matter of personal taste. Would you prefer a row of files to bear identically-dimensioned labels, or is it more important to you that the text size is the same on each? But there are some applications such as file tabs where fixed-sized labels are more appropriate.

Those minor issues aside, we think the PT-P300BT would be a handy addition to most offices and many tradies' tool boxes.