Easily migrate your OS to a new hard drive 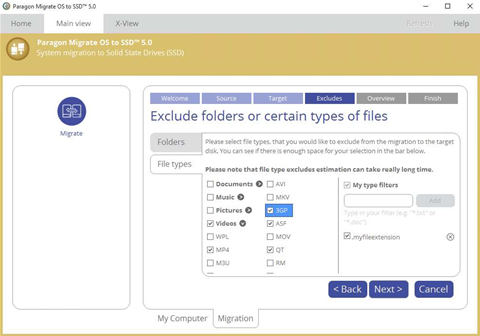 Paragon Migrate OS 5.0 makes it easier to upgrade your computer's hard drive to one with more capacity or to a high-performance SSD.

Replacing a desktop or notebook computer’s hard drive with a solid state drive (SSD) is a relatively cheap way of giving it a new lease of life. You can pay someone to do the job for you, but with many models swapping the drive can be well within the capabilities of a moderately handy individual, and text or video instructions for the physical side of the process abound on the internet.

It is possible to treat the upgrade as an opportunity for a fresh start, in which case you would reinstall the operating system and applications, and perhaps transfer selected data files from the old drive.

But most people want to preserve their current environments. Some SSD upgrade kits include software for transferring the contents of the old drive to the new, but if you need to buy it separately and are using Windows, this writer has had success with Paragon Migrate OS.

Paragon Migrate OS 5.0 has just been released, adding support for Windows 10, a Windows 10 style interface, and a couple of more technical changes.

The advantage of using Paragon Migrate OS or similar programs is that they take care of a number of under-the-bonnet issues that simplistic methods may miss.

For example, you want the resulting drive to be bootable without any fiddling about, and automatic adjustments to partition sizes to suit the new drive can make a difference to performance.

Paragon Migrate OS also makes provision for moving to an SSD that's smaller than the original hard drive by providing the option of excluding certain types of file.

The upgrade process generally involves connecting the SSD to the computer either using a USB to SATA cable or by temporarily fitting the drive into a USB case, running Paragon Migrate OS or similar to transfer the system to the SSD, then physically replacing the hard drive with the SSD. Variations to this process may apply to desktops, and Paragon Migrate OS is equally suitable for migrating from one hard disk to another.