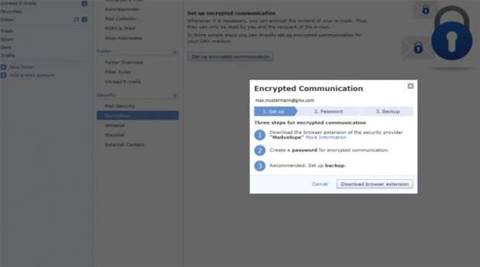 GMX Mail adds to its long list of features by making it easier to keep your email confidential.

Encrypting your email is a great idea, but for most people that's all it remains – an idea. That could be about to change with the release of an easy system from free webmail provider GMX Mail, which makes end-to-end encrypted email something that’s easy enough for even the least technical user to have.

For those who haven’t heard of GMX Mail, it’s an ad-supported webmail service provided by Germany-based GMX (Global Mail eXchange). It offers a host of features for free, including unlimited storage for both email and files, the ability to handle 50MB attachments and collect email from other services, plus a calendar, antivirus, spam filter, Android and iOS apps.

GMX’s new encryption system is based on PGP (Pretty Good Privacy), the open standard method of encryption which has been around for many years. But, as you’ll know if you've ever set it up, PGP was designed for technical users in a world where they tended to have a single device. For non-technical users in a world where everyone has many devices PGP isn’t quite so simple.

What GMX has done is created an assistant which helps you through the three problem areas of using end-to-end encryption: setting up keys; sharing your public key with people you send encrypted messages to; and propagating the ability to encrypt using your keys across multiple devices.

GMX has release the source code to its assistant (which comes in the form of a browser plugin) and related software, and is commissioning security companies to do regular audits of the software and system. The aim is to ensure that all security information, such as private keys and passwords, will never be viewed by GMX.