Has Lenovo reinvented the hybrid tablet? 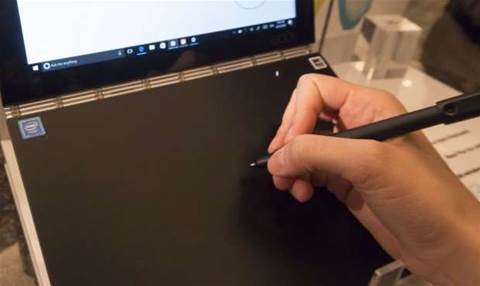 The super-slim Yoga Book has a keyboard that can double as a piece of paper!

How do you make a hybrid that's different to all the other hybrids out there? Simple: make one with a keyboard that can double up as a piece of paper. Yes, you read that right: a piece of paper. Say hello to the Lenovo Yoga Book.

It's been three years in development – apparently this is the longest period of time Lenovo has ever spent working on a single product – but after getting our hands on the device in a sneak preview, we can report that it's worth the wait.

This is a light device. At 690 grams the Yoga Book is barely heavier than your standard notebook and actually 20g less than an iPad Pro. It's a delight to hold and bend round, and its tiny 9.6mm aluminium magnesium-alloy chassis (which tapers down to a mere 4.05mm on the screen side) is genuinely beautiful. But you don't want to know about that – you want to know all about that keyboard. The one that is also a piece of paper (no, really).

Lenovo calls it the Instant Halo Keyboard, which isn't the most descriptive or poetic of names. But what Lenovo has done is ditch physical keys for a virtual, backlit, touch keyboard that can pull double duties as an electromagnetic resonance (EMR) writing surface. Tap the small pen button in the top corner and you can switch effortlessly between a keyboard and a writing surface, letting you to type, draw and take handwritten, digitised notes at the touch of a button.

It's extremely clever, but as you'd expect anyone who is used to a physical keyboard is going to take a while to get used to it. There's haptic feedback which certainly goes a long way towards making sure you feel like you've pressed the right key – a huge improvement on Microsoft's Surface Pro 4 Touch Cover keyboards – but our brief hands-on time with the device was rife with mistakes and typos. Trying to type on a busy show floor is hardly the most conducive environment for getting the best out of it, but it remains to be seen just how practical this is, and whether it's actually any more useful for serious typing than an onscreen keyboard.

Still, even if it is a little twitchy at first, Lenovo's artificial learning software should make typing easier with time, because this isn't just a passive projection. Instead the keyboard will learn where your fingers land when you hit certain keys and automatically adjust. For instance, if you always hit the spacebar below its defined area, then the Halo Keyboard will remember that and still register the keypress for you. The same goes for letter keys, and there's even a predictive text engine, allowing you to type as fast as you would on a normal mobile device.

However, we're more excited about being able to use its bundled stylus as a proper note-taking device. As much as we like Microsoft's Surface Pro 4, for instance, there's just something about writing on glass that doesn't sit well, regardless of whether we're taking notes or knocking out the odd doodle. With the Yoga Book, we can write using both the touch-sensitive keyboard surface and an actual, physical pad of paper. 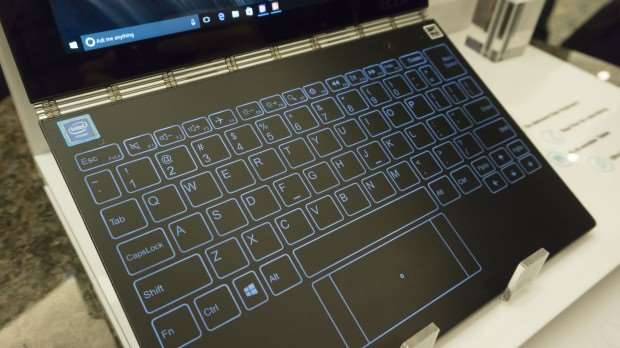 It's not an entirely new concept but, unlike Wacom's Bamboo Spark smartpad, you can see directly what you're writing onscreen, rather than waiting for your notes to sync with your phone.

Each Yoga Book comes with a magnetic clip so you can slot any kind of A5 notepad underneath the screen, and it can still register and digitise your pen strokes up to 10mm in paper depth. This is great if you prefer writing on paper, but the keyboard surface is a pretty good substitute as well, thanks to its convincing textured finish, which makes it feel almost as good as writing on paper when you don't have a real pad to hand.

The pen itself has 2,048 levels of pressure sensitivity, and comes with two tips – one for drawing either onscreen or on the keyboard, and one for paper. The device has built-in palm rejection, too, so you can rest your hand on either surface without making any accidental marks, and all your notes are instantly converted into OneNote – or, if you're using the Android version (yes, there will be two different models of the Yoga Book – one Windows and one Android), your notes will be saved to Lenovo's proprietary Custom Note saving app.

The Android 6 interface has been pretty much left alone by Lenovo, but it has included a few productivity tools to make it easier to use. Multi-window support is arguably the most useful feature here, letting you have up to four miniaturised windows onscreen at any one time, but you'll also find a taskbar and standard keyboard shortcuts, giving it the same kind of laptop-friendly look as Google's Pixel C. A free upgrade to Android Nougat will also be made available in the coming months. The Windows 10 version, meanwhile, will support Microsoft's new Windows Ink feature, as well as Cortana and OneNote.

Lenovo's hoping to squeeze around 15 hours of mixed-use battery life from the Yoga Book, but its 8,500mAh battery also supports fast-charging, so it should be relatively easy to top up throughout the day if you're running low. A fast charger is included in the box, and Lenovo claims you'll be able to get 80% in just 50 minutes. 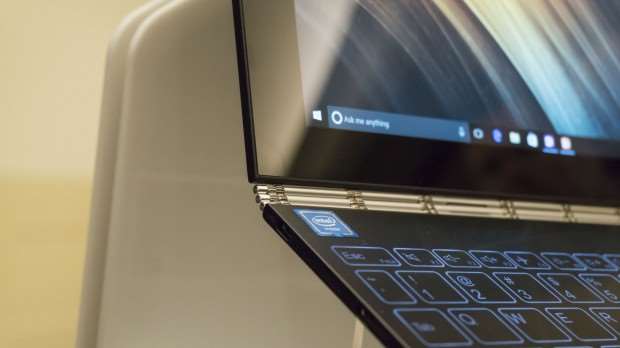 The one thing it doesn't have, though, is a USB Type-C port. Instead, you get just standard micro-USB. That's partly because this product's been so long in the making, but it's a shame nonetheless. You also get a micro-HDMI output and a 3.5mm headphone jack, but that's your lot in terms of ports.

The display itself measures 10.1in across the diagonal and has a resolution of 1,920 x 1,200 pixels. There's 4GB of RAM onboard, as well as a 64-bit Intel Atom processor and 64GB of storage that can be expanded with a microSD card up to 128GB. The speakers support Dolby Atmos technology for enhanced audio, and 4G LTE versions will also be available depending on the market.

Naturally, its performance won't be up there with traditional ultraportables considering it just as an Atom chip inside it, but as a multipurpose note-taking tool, the Yoga Book looks as though it might finally bridge that gap between laptop, tablet and notebook.