Send invoices directly from one accounting app to another 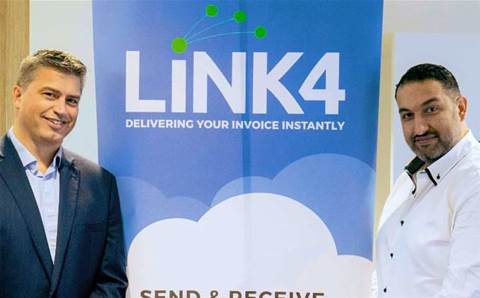 For many business owners, manually entering paper invoice data into your accounting software can be a time consuming pain.

While some accounting systems such as Xero have features that allow users to send invoices directly to other users of the same system. The catch is that not everyone uses Xero – what about your customers and suppliers who use MYOB, Reckon or Saasu?

Set to launch in late September following a beta trial, the service allows you to send invoices directly to your customers’ accounting application, as well as receive invoices from your suppliers instantly in your accounting system.

The best part is that it’s compatible with all the major accounting systems including Xero, MYOB (AccountRight and Essentials), Reckon One, QuickBooks, Saasu and Sage One.

So, for example, if your business uses Xero and you have a customer that uses MYOB, they can send them an invoice through Link4 and it will show up directly in their accounting system.

“What we’ve found is that cloud accounting systems can talk to each other (through APIs), but no-one in Australia had made that connection – so that’s what we’ve done,” Link4 cofounder Robin Sands told BIT.

“Xero does have the ability to send invoices from Xero to Xero customers, which is an in-built feature their users love, and we’re extending that feature from within their walls to anyone. So now people can send an invoice from Xero straight to a customer that’s using MYOB and it appears instantly.

“That then means that their accounting person doesn’t need to manually enter in all that data. They just get it as a draft, look at it and go ‘yep, all that information is correct’, assign it to an account and click accept.”

While there is a once-off setup process involved in using Link4, there’s no additional steps in creating an invoice, and no software or apps that need to be installed to use the system.

“It’s a matter of logging on to the [Link4] website, putting your [accounting application] details in, connecting to your customer and it’s done,” Sands said.

“And then your customer never actually has to come into Link4 again if they don’t want to. There’s a tunnel behind-the-scenes that allows the invoice to be delivered. And there’s nothing to install – there’s no extra steps to create an invoice.”

Something to crow about

Based in Adelaide, Link4 was one of four businesses selected to participate in the recent SouthStart Accelerate accelerator program.

While the program offered $25,000 in seed capital, Sands said the biggest benefit came from gaining access to 30 business mentors with a range of different skillsets.

“We started about a year ago researching what was needed and what we could do and began creating the solution towards the end of last year,” Sands said.

“We were asked to pitch at SouthStart, and were one of five selected to present at the conference, which was a very cool thing. Then we did the SouthStart Accelerator program.

“We’re doing some beta trials at the moment and plan to do a general launch at the end of September to general availability.”

Link4 is free for 10 invoices per month or $35 per month for 50 invoices, with higher-volume plans also available.