Back up your business and your life with Acronis 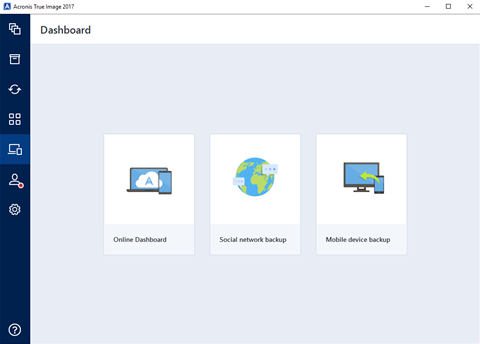 Being able to get up and running quickly after a computer disaster is vital for businesses, and drive imaging tools are ideal for this purpose – making it easy to capture and restore a complete ‘image’ of a hard drive.

Acronis True Image is one of the better-known drive imaging tools available, and its latest version offers a number of enhancements.

Acronis True Image 2017 backs up everything on the hard drive of a Windows or Mac computer: the operating system, programs, settings and boot information, as well as documents and other files – and you can even do so remotely.

Perhaps recognising that Facebook is increasingly used for business as well as personal use, Acronis has added Facebook backup, automatically archiving your photos, videos, contacts, comments and so on from the social media site.

The latest version also has enhanced mobile support, allowing you wirelessly back up iOS and Android devices to your desktop.

An archiving module enables you to move large or old files to an external drive or Acronis’ cloud service, and they can now be protected with 256-bit AES encryption. A new Search tool helps you find particular files within a backup.

Acronis True Image will back up to various destinations, ranging from external drives to the cloud. The late version has improved support for backing up to network attached storage (NAS) devices, meaning your storage device should now be detected automatically, and reconnected if it goes missing at any point.

Similarly, it now recognises when Windows assigns a different drive letter to your backup device, and continues without errors.

The interface has been redesigned, and a few older or redundant features have been removed (including email backup, Acronis Extended Capacity Manager and Trim SSD).

The full version includes 50GB of storage on Acronis’ cloud service and, for subscriptions, 500GB for the first year.