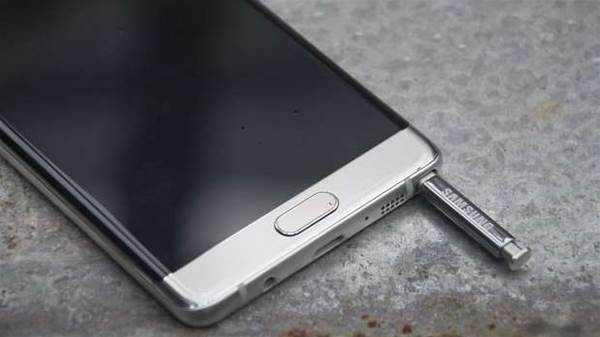 Could this be the best smartphone on the market? After extensive testing of Samsung's new big-screen phone, we give our verdict.

Earlier this month, when we gave the Samsung Note 7 a quick test-drive, we were impressed. Now, after more extensive testing, we can happily report it’s the real deal.

Back in 2011 the Note almost single-handedly started the boom in phablets – the term invented for smartphones between a traditional phone and tablet in size. Well, now it sets a new standard – and not only in phablets, but also in smartphones overall.

There’s no getting around the fact the Note 7 is a big phone but impressively, with dimensions of 154 x 74 x 7.9mm, it's actually smaller overall than the iPhone 6s Plus – a good result when it manages to pack in a larger 5.7-inch AMOLED screen.

It’s also a great-looking device. Samsung has learned a thing or two about how to make an attractive handset since it ditched plastic and removable batteries a year and a half ago, and the Note 7 carries on the good work. Barely any space on the front of the handset is wasted, with the curved Gorilla Glass 5 screen wrapping around the front of the phone and the edges of the glossy rear panel also curving up to meet the phone's slender aluminium frame. 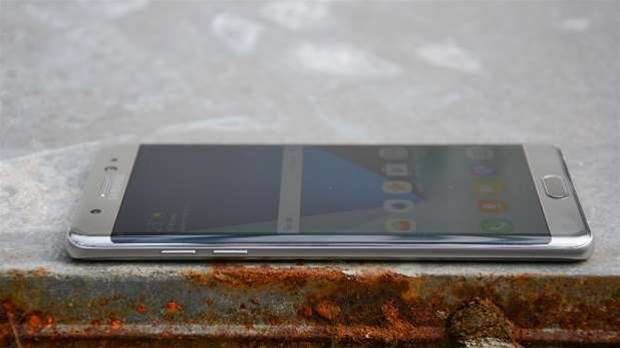 You'll have a choice of two colours: Black Onyx and Blue Coral. Whichever finish you opt for, the phablet is extremely sleek and guaranteed to catch the eye of your colleagues and friends.

The Galaxy Note 7’s other key strength – and one not matched by many other smartphones today – is its stylus, which Samsung calls ‘S Pen’. The stylus has gone out of fashion since PDAs stopped being a thing, but the S Pen makes an extremely compelling case for them being given a second chance.

This is the fourth iteration of the S Pen, so it's no surprise that it's more of a pleasure to use than ever before. It has a 0.7mm tip (down from 1.6mm in the previous model), and now feels less like you're dragging plastic across glass, and more like you're actually writing on a page. Even something as typically fiddly as annotating screenshots is a doddle. 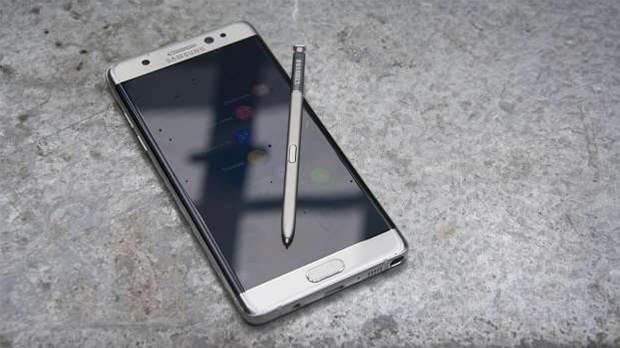 It's not just the feel of the S Pen that's improved. It's more sensitive than the previous model, with 4,096 levels of pressure sensitivity instead of 2,048, and Samsung has added a few more party tricks, too. The most impressive of these is that the Note 7's software now comes with Google Translate built in, meaning you can get an instant translation just by hovering over a word. More impressively, this even works with photos, so intimidating foreign menus needn't traumatise you anymore – unless they use a silly font, of course.

The Note 7 also gains some of the established features of Samsung’s flagship, the Galaxy S7. In particular, this means the Note 7 is more rugged than older versions, despite having to include a hole to keep the S Pen in. The Note 7 gets an IP68 rating, meaning that it should survive for half an hour in 1.5 metres of water – so it won’t die if you accidentally drop it in sink while washing up, and you can still use Google Maps or send text messages in the rain.

Elsewhere, security gets a boost. The fingerprint scanner made its debut in the Note 4, but this time, it's accompanied by an iris scanner. Stare at your phone for a few seconds to set it up, and then it unlocks almost instantaneously when you flash your baby blues at it.

Samsung says contact lenses and glasses could get in the way of this, and we’re not convinced it’s much more convenient than just using your fingerprint, but it's nice to have, and an impressive party trick if nothing else.

Samsung's Note phones have, historically, been absolute beasts when it comes to specifications and the Samsung Galaxy Note 7 keeps this trend going. Like the S7, the Note 7 uses the Samsung-designed Exynos 8890 octa-core processor with four cores running at 2.3GHz and four at when all-out power isn't required. This is backed up with 4GB of RAM, and it comes with 64GB of storage built in, and yes, you can expand it with a microSD card.

So, to performance. At the launch event, Samsung claimed the Note 7 was around 30% faster than the Note 5, and with 58% better graphical performance. Our testing – using Geekbench to measure processor performance and GFXBench for graphics – revealed that to be largely accurate.

In both of our benchmarks, there's clear daylight between the Samsung Galaxy Note 7 and the Note 5, which shouldn't surprise you, but hardly any difference between the S7 and Note 7, which also isn't surprising, given they both have the same processor, RAM allocation and screen resolution.

In short, it’s extremely quick, and will almost certainly remain so for the foreseeable future – at least as long as your two-year contract lasts. We experienced no slowdown or delays indicative of poor software implementation, and everything I did with the phone took place smoothly and instantaneously.

The other important internal specification to take note of, of course, is the battery, and it's here that the Samsung Galaxy Note 7 pulls ahead. It has a 3,500mAh power cell, which is, surprisingly, slightly smaller than the S7 Edge's 3,600mAh battery, but a significant bump on the S7's 3,000mAh.

This leads to (but is not entirely responsible for) a record score in our video rundown battery test: it lasted 21 hours 57 minutes. That's an astonishing result and puts the Samsung Galaxy Note 7 way out in front of the competition. In fact, the only rival that gets close is the Galaxy S7 Edge, and even then we're talking about a result around three hours shorter at 18 hours 42 minutes.

Where does this extra performance come from? I'd surmise it's from the Note 7's new and improved OLED display, which we'll discuss further in the next section, since to all intents and purposes, the phone's core hardware is identical.

To look at the specifications, the screen isn't anything special, at least relative to the rest of the Samsung range. It's enormous, measuring 5.7 inches across the diagonal but it's the same resolution as the Samsung Galaxy S7 Edge at 2,560 x 1,440 pixels and it uses the same flexible technology to achieve those lovely curved edges. It also has the same useful always-on screen and edge display.

And yet, behind the headline specifications lies an incredibly of a screen that moves display tech on a significant notch. Top of the list is improved automatic brightness. The Note 7 is the first smartphone we’ve come across with dual ambient light sensors, with one sensor at the rear and one at the front, allowing it to set the brightness of the screen more accurately than other phones. You can adjust this yourself if it's not at the level you’re comfortable with, and the phone will also learn your preferred setting for any given ambient light level – a clever feature that actually seems to work.

What's more, the Samsung Galaxy Note 7’s peak brightness is higher than any AMOLED smartphone we’ve ever tested. In our tests it maxed out at 872cd/m2, although note that the screen only reaches such crazy levels when the screen is showing a small patch of white and the ambient light levels are ludicrously high. It only boosts up when you really need it and is used to deliver mobile HDR video content via Amazon Video. 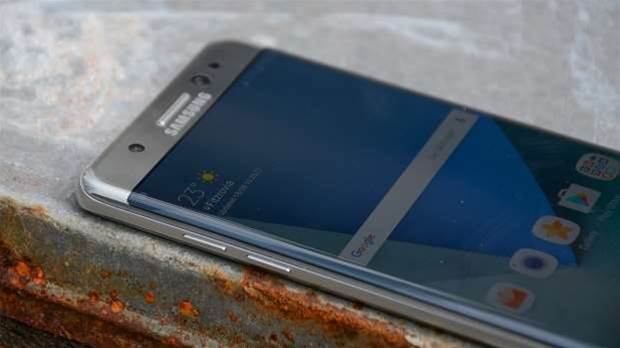 This isn't the screen's only big strength, however. The Note 7 is also highly colour accurate, and has perfect contrast, ensuring photos and movies look utterly fabulous.

Elsewhere, the Note 7 is less innovative, but still very, very good. The rear camera module is exactly the same one as you get on the Samsung Galaxy S7, and it takes amazingly good photographs with impressive reliability.

It’s a touch surprising that Samsung hasn't seen fit to tweak it in some small way. After all, that’s the way the firm has slowly but surely inched its way to the top of the smartphone market over the past five years or so. However, the camera on the S7 is so good, we can understand why Samsung might have been a little more laissez-faire this time around.

Just to remind you of the specifications, the Note 7’s rear camera is a 12-megapixel affair with an aperture of f/1.7. It has dual-pixel phase-detect autofocus, meaning every pixel on the sensor can be used to sense focus, not just a handful. There’s optical image stabilisation, a dual-LED flash and the sensor itself is a large 1/2.5in with pixels μ1.4 in size. 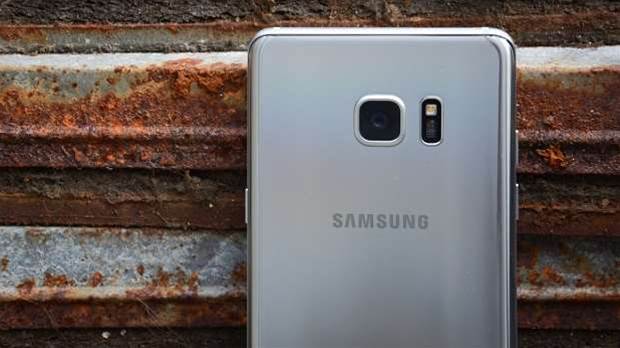 The quality of the photos and video (up to 4K in resolution) this phone can produce is nothing short of stunning. Samsung is currently leading the way in the smartphone camera stakes and the Note 7 does nothing to derail this progress.

The final point of difference between the Samsung Galaxy Note 7 and its stablemates, is that this time Samsung has made the jump to USB Type-C, while the S7 stuck resolutely to micro-USB.

How you feel about this will chiefly depend on how many spare cables you have lying around, but in any case, there’s support for Samsung's brand of fast charging and wireless charging support for when you've misplaced your solitary Type-C cable.

It does mean the Note 7 requires another version of the Gear VR, however, with existing models only including a micro-USB port.

The Samsung Galaxy Note 7 is a brilliant smartphone that you wouldn’t expect to come cheap – and, at $1,349 outright, it doesn’t.

That’s $100 more expensive than the Samsung Galaxy S7 Edge – but with the stylus, 0.2in extra screen real estate, iris recognition and a better battery and screen, we’d say it’s worth the extra cost.

Be aware also that contract pricing for the Note 7 varies widely, starting from $67 per month (for 300MB of data) from Virgin, whereas Telstra’s cheapest deal is $95 per month (for 1GB).

Optus’s 1GB plan looks quite reasonable at $71 per month, but to put that into perspective, its equivalent plan for the Nexus 6P is $48 per month.

Does that mean you shouldn't buy the Samsung Galaxy Note 7? Absolutely not. If you want the best of the best, you absolutely should consider buying one. The Note improves on the Edge in a handful of important ways, and that makes it, by a gnat’s whisker, the best smartphone you can buy right now. If you’re going to spend a lot of money on your phone, why not get the best?