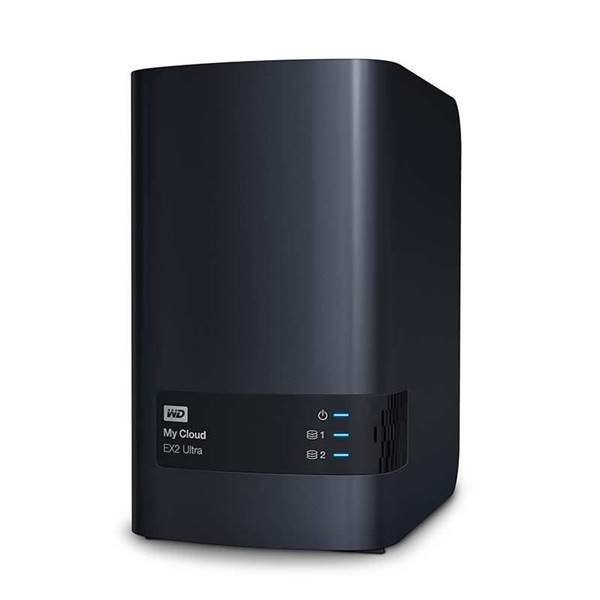 The WD My Cloud EX2 Ultra offers plenty for the money, including the ability to manage it via the web or mobile device. We took it for a spin to see if it lives up to its promise.

External hard drives are great for individuals but if you need extra storage or a backup device for an office network, it’s worth considering a network attached storage (NAS) device. The WD My Cloud EX2 Ultra is one such device that’s designed for homes and small offices.

It’s a two-bay NAS device that allows you to install two hard disk drives in a RAID (redundant array of independent disks). You can set it up either in RAID 0 configuration for maximum performance, or RAID 1, so each drive mirrors the other – halving the available space but providing redundancy if one drive fails.

The 'My Cloud' designation means the EX2 can – along with other compatible devices – be managed and accessed from WD's My Cloud web service, and files are remotely accessible via the My Cloud app for iOS and Android.

The app makes provision for the automatic backup of photos and videos from a mobile device to a My Cloud storage unit, which is convenient for those who prefer not to use cloud services such as Dropbox for this purpose. But this function relies in part on WD's My Cloud service, so the process isn't completely free of outside involvement. A sensible feature is that these backups can be restricted to Wi-Fi connections, so you don't need to burn through your mobile data allowance. On the other hand, the longer the files only exist on your phone, the greater the risk that they will be lost.

For computers on the same network, the EX2 appears like any other shared storage, and OS X's Time Machine can be directed to the NAS. Our preference is to use directly-connected external drives for the latter purpose, as problems seem more common when networked storage is used.

The EX2 has media serving capabilities, including iTunes and DLNA support. That’s obviously great for homes but it also has business applications such as streaming promotional videos to a screen in your reception area.

A selection of applications can be optionally installed including Milestone Arcus for use with security cameras. Joomla, phpBB and WordPress can be installed for using the EX2 to host websites, and although self-hosting (instead of using a web hosting provider) is impractical for most small businesses, this might be useful for creating an intranet.

We installed WordPress, only to find that the software, plugins and themes all needed updating. We also found that switching off the WordPress app in the EX2's dashboard does not take effect until the NAS is restarted.

There's also a Dropbox app, allowing you to sync a Dropbox account with a folder on the EX2. But there's a significant and longstanding bug: the EX2's administration user name must be 'admin' or you won't be able to connect to a Dropbox account. This caused much headscratching until we found this report on the WD community support site. Bear in mind that even if you choose specific Dropbox folders to sync with the EX2, all the files at the top level of your Dropbox will be included. That's not necessarily a problem, but it could result in a lot more traffic than you expected.

More sophisticated users can connect servers to the EX2 via iSCSI, or make other iSCSI storage appear to be volumes on the EX2.

The EX2 seems no more difficult to manage than other NAS devices we've used, but you should always give careful thought to the access rights granted to individual users.

The setup guide is not much bigger than a playing card and is Ikea-terse: diagrams for connecting, waiting for the right combination of front panel lights, and then opening a specified URL. If that last step doesn’t work you may find yourself wishing that manufacturers still put the software and documentation in the box. And, unfortunately, that was the case for us. The setup process didn’t complete and after much trial and error found it had created the admin account with a name other than "admin" as stated in the documentation.

Once we were in, it was easy to install the latest firmware from the dashboard, and then when we logged back in to the MyCloud service, the EX2 appeared. Hopefully, current stock already has newer firmware so users can simply follow the documented setup procedure. A subsequent firmware release also includes fixes for multiple security issues and other problems.

After we got over the teething problems the EX2 turned out to be a solid, capable, flexible and quiet NAS.