This device turns a wall or tabletop into a touchscreen 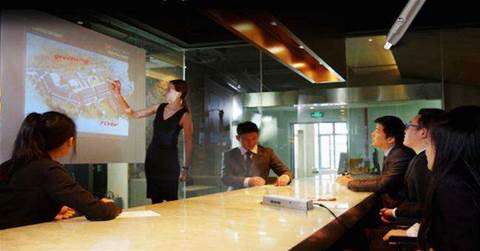 The Lazertouch is a tiny crowdfunded device that has many potential applications for small businesses.

Not everyone wants to contribute to crowdfunding campaigns, but the Lazertouch mini projector looks rather cool.

It’s basically a portable video projector that incorporates an Android tablet. The projector can throw an image of up to 3.8 metres (measured diagonally) onto a wall or other surface. But the really clever aspect is a laser-driven system that allows the projected 'screen' to respond to touch.

This feature could make the Lazertouch a very useful and affordable system for information displays in hospitality venues, interactive in-store advertising, or as a flexible presentation device for mobile professionals such as consultants, sales people and trainers.

There's also a stylus that works via an infra-red link for finer operations such as writing, and the Lazertouch is said to work just as well when projecting onto a tabletop.

The device can operate on its own, or you can use it with a computer, Blu-ray player of other source via a HDMI port. Miracast and AirPlay are supported for wireless connectivity to a range of devices.

The online price for the Lazertouch will be US$650, but if you’re keen, you can pre-order one for as little as US$475 plus shipping via Indiegogo. Just be aware of the risk involved with crowdfunding – you're unlikely to receive the product if the project doesn’t reach its financial goal, and you should also check the refund policy before making a payment.

Copyright © BIT (Business IT). All rights reserved.
Tags:
crowdfunding hardware projector
By Stephen Withers
May 13 2016
8:54AM