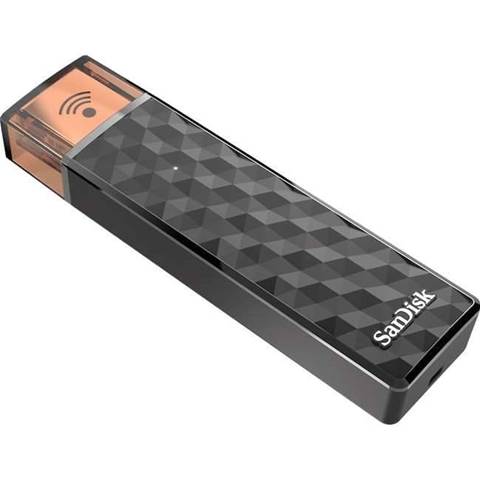 SanDisk's latest gadget is small and wireless. If you have a large library of promotional videos - or other content for that matter - that you carry around to show prospective and actual clients, you may have bumped up against the storage limits of your phone or tablet.

Some models make it easy to boost the capacity by installing a microSD card, but that's not always an option. SanDisk does offer 'double head' thumb drives such as the iXpand for iPhone and iPad and the Ultra Dual USB Drive 3.0 for Android devices (we previously reviewed an earlier version of the latter).

But the need for a physical connection can be inconvenient where handheld devices are involved.

SanDisk's Connect Wireless Stick resembles a thumb drive, and indeed can be used as one. But as the name suggests, it can also connect via Wi-Fi to mobile devices and computers.

Connect apps are available for iOS and Android (we spent most time with the latter) to allow playback of videos, music and photos from the Stick. Most popular file formats -  including JPEG, TIFF, AVI, MP4, M4V, FLV, MP3, AAC, OGG and FLAC, as well as DOC(X), XLS(X), PPT(X) and PDF - are supported, but DRM-protected content isn't. Up to three devices can access the Stick simultaneously.

The Android version of the app suffers from permissions bloat, insisting on access to location plus Device ID and call information, as well as the reasonable need to access photos/media/files, contacts, and Wi-Fi connection information. We wouldn't normally allow that on our phone, but we pushed ahead for the duration of the test.

Computers and other devices that can't run these apps can access the Stick via their web browsers, but in this mode there's no provision for uploading files to the Stick. Instead, computers have to use a USB connection for that purpose, although it must be said that it is a quick and convenient way of loading the Stick with content.

In addition, the device's gallery or camera roll can be automatically backed up to the Stick, as can the contacts list, and files can be transferred from the Stick to the device's own storage.

While you can connect a device directly to the Stick's Wi-Fi, there's also the option of having the Stick connect to existing networks such as your office or home Wi-Fi. That way the content on the Stick is available to the device whenever they are on the same network. This approach also allows the Connect app to stream content to Chromecast or Apple TV (as appropriate for the device type). We tried it with an iPad Air and a previous-generation Apple TV, and this feature worked smoothly.

While we didn't check to see exactly how long the Stick would run on one charge, battery life wasn't a obvious problem during our tests. That said, if you're away from a power source for an extended period - perhaps on a long-haul flight on on older airliner - it might be prudent to download a movie to the phone or tablet and then switch off the Stick while you're watching rather than streaming it.

A minor but useful touch is the provision of a small hole to allow the Stick to be hooked on to a lanyard (the type with a fine cord loop) to reduce the risk of loss.

There are a few wrinkles.

By default, the Connect Stick's Wi-Fi network is open. While that does simplify setup to some extent, it does put the onus on the user to secure the connection.

The manual warns that a Connect Stick can't be charged via a cable; instead it must be plugged directly into the USB port of a computer or charger. Naturally, we tried the using it with a cable, not surprisingly it didn't work at all. In most situations that's not a major inconvenience, but it is rather unusual. Imagine having to plug your phone directly into a charger...

Access to the Connect Stick is supposedly via the URL http://www.sandisk.com/myconnect - but that only works if the computer (or other device) is directly connected to the Stick's Wi-Fi, if the computer doesn't have another network connection with a higher priority (eg, Ethernet), and if the computer's DNS setting is via DHCP. Yes, we know that's getting a bit techy, but we ran into what turned out to be the DNS issue and SanDisk's support people weren't able to help.

It's a convenient, lightweight and compact way of augmenting your phone or tablet's storage, or for automatically or manually backing up new photos, videos  and contacts when you don't want to use a cloud service.