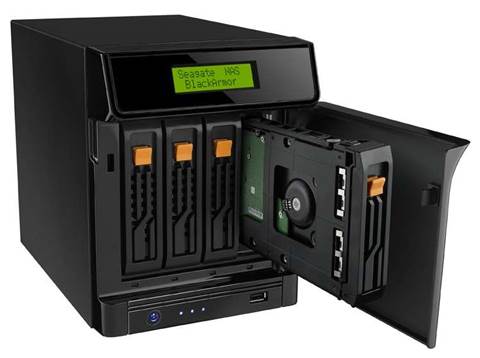 If the total capacity of your NAS is beginning to feel like a constraint, Seagate may have the answer.

Seagate has just released a new 8TB hard drive designed for use in NAS storage devices, which means a substantial increase in the maximum capacity of such units when compared with the previous 6TB drives.

What we don't know at this stage is how much the Seagate NAS 8TB HDD is going to cost - it won't be available on the general market until the end of this quarter - but it has been given the tick of approval by popular NAS vendors including QNAP, Synology and Thecus.

Whether you can take advantage of these new, higher-capacity drives in your existing NAS depends on its make and model. In general it is good practice to only use drives that have been qualified by the NAS manufacturer for use in the specific enclosure.

Even if the drive is compatible, expanding the total NAS capacity by replacing a smaller drives with bigger ones can be an extremely time-consuming process requiring the replacement of each drive in turn. On the other hand, some vendors (eg, Synology) offer an approach that allows different capacity drives to be used together effectively, doing away with the need to replace all of the existing ones.

Either way, it's not necessarily a complicated job, but it's not straightforward and there is room for catastrophic error, so we recommend reading the documentation very carefully before starting, or seeking expert assistance.

But those about to buy a NAS have another simple option that will allow much more storage space to be packed into a given number of bays.