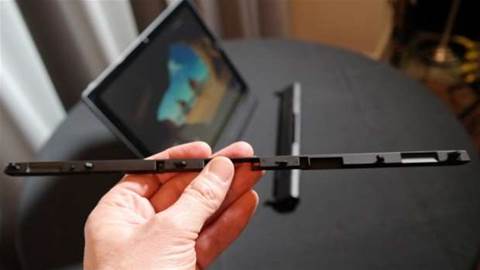 When is a tablet not a tablet? When it comes with all manner of extras to turn it into… well, virtually anything

Lenovo is exploiting the “halo” factor of its ThinkPad X1 range for all it's worth at CES 2016. Not content with launching the OLED-equipped ThinkPad X1 Yoga, the X1 family now includes tablets.

It's an interesting move, especially as Lenovo takes the tablet idea that bit further than its rivals courtesy of plug-in modules that add new features as and when you need them.

To start with, there's a “productivity module”. Its key skill is to boost the X1 Tablet's ten-hour battery life by an extra five hours, but it also adds a USB port, OneLink+ connector and an HDMI video out. In tandem with the optional keyboard, which connects in a similar fashion to the detachable keyboard found on Microsoft's Surface products, it turns into a proper little computer.

You'll also be able to buy a “3D imaging module” that includes a RealSense camera, enabling you to capture and edit objects in 3D and then, perhaps, print them on a 3D printer. A “presenter module” that includes a pico projector capable of displaying 60in displays from 2m is scheduled for release in May. I can't see either of those two additions being mainstream hits, but the idea of adding fresh capabilities via add-ons is undeniably attractive.

Another reason these extras may struggle to take off is their proprietary connector, which makes it less likely to appeal to third-party peripheral manufacturers, while the mechanical locks for connecting the accessories (rather than magnets, say) feels a little clunky.

The advantage is that once attached, the modules are solidly connected to the tablet; I was perfectly happy to hold it by the productivity module, for instance. Arguably, that's more important than making the modules easy to connect, and it's certainly an improvement on the fiddly connectors of the ThinkPad Helix that the X1 Tablet replaces. 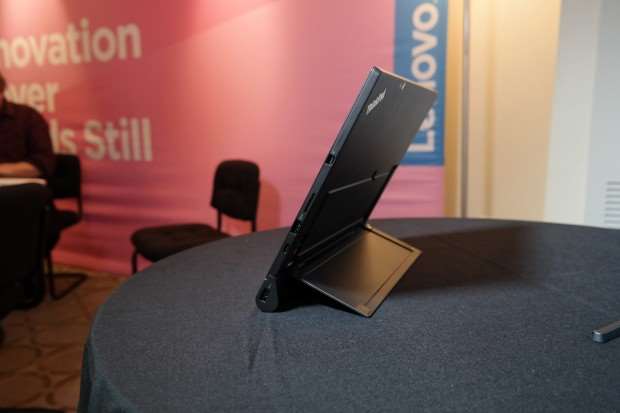 The Lenovo X1 Tablet weighs 795g without the keyboard or modules, which is what I'd expect for a tablet with a 12in screen. Speaking of which, this one looks a competent IPS display - it has a 3:2 aspect ratio and a resolution of 2,160 x 1,440 pixels - but frankly everything looked a little drab after the OLED panel on the X1 Yoga.

Adding the keyboard increases the weight to 1.1kg, which is pretty good for a 12in laptop. I wasn't able to test the keyboard itself (the units were trapped in customs) but a keystroke depth of 1.35mm suggests it should be a pleasure to use rather than a chore, and when I used a similar keyboard designed for Lenovo's IdeaPad tablets I was more than happy. There's even a trackpoint for ThinkPad traditionalists. 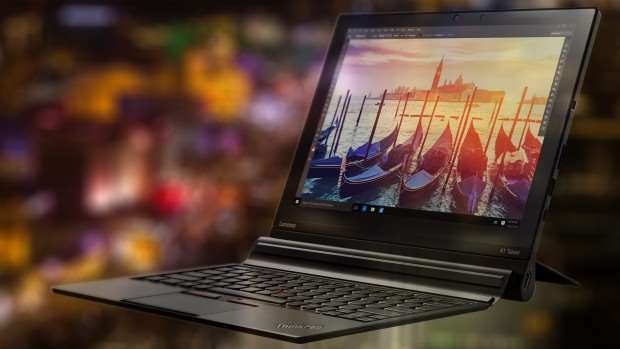 Don't expect cutting-edge power, because Lenovo employs a Core M processor rather than a fully-fledged Core i5 or Core i7. In testing, we've found these throttle back once you start pushing them (for example, when encoding video), but they're fine for occasional bursts of activity, and Lenovo has eliminated another performance bottleneck by using super-fast NVMe SSDs.

I'm not quite so taken by the ThinkPad X1 Tablet as I am by the X1 Yoga, but once again Lenovo deserves credit for not only thinking about how tablets can be enhanced but for putting such an innovative product on shelves to flourish or fail. Sure, it may not be a wild success, but it's great to see innovation given a chance to succeed rather than be stifled at the ideas stage.

The X1 Tablet goes on sale in February, with a starting price of US$899 (I don't have Aus pricing yet). If you do want to expand it with those modules, expect to pay US$149 for the productivity module, US$279 for the presenter and US$149 for the 3D imaging module, which will be available from May.

I have read and accept the privacy policy and terms and conditions and by submitting my email address I agree to receive the Business IT newsletter and receive special offers on behalf of Business IT, nextmedia and its valued partners. We will not share your details with third parties.
Copyright © Alphr, Dennis Publishing
Tags:
connector hardware imaging ips keyboard laptop lenovo microsoft modularity presenter tablet the tablet thinkpad yoga
By a Staff Writer
Jan 7 2016
7:48AM