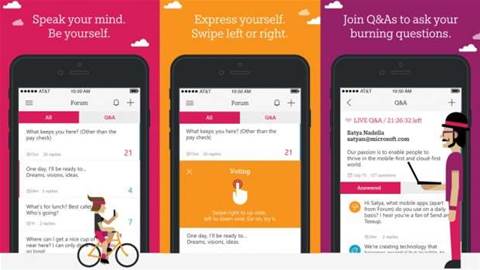 Microsoft Garage, its 24-hour ideas factory, has cooked up a business app compining Ask.fm and Tinder

Microsoft's trendy alternative to Google X-Labs has released a new iPhone app for company employees to ask and answer questions.

Known as Forum, presumably because that's all Microsoft Garage has actually built, it allows employees to use Tinder-like swiping to vote up or down questions. This means that not only can employees pose questions to others, but what gets a response is decided by all instead of by a ballot box.

Interestingly, from the screenshots uploaded to the US App Store, Forum seems to allow for live Q&A sessions in-app. Currently it's not clear if submissions can only be made via the app, or if someone can chime in via desktop or web apps too.

As you can tell, this is quite the departure from what Microsoft usually spends its time doing. This app is more of a startup idea for workplace communication than part of a big Windows 10 picture for the workplace. Perhaps the Redmond-based company feels it needs to diversify to keep up with the likes of the workplace-dominating Slack, but whatever the reason it seems incredibly unlikely you'll ever find yourself using Forum.

Not only is it currently limited to the US, but it's also largely skewed towards answering the questions nobody really cares about. One question seen in screenshots is “What keeps you here? (Other than the pay check)”, that's a HR manager's nightmare if voted up and commented upon. It's essentially bringing Glassdoor into the workplace, instead of keeping it outside.

I have read and accept the privacy policy and terms and conditions and by submitting my email address I agree to receive the Business IT newsletter and receive special offers on behalf of Business IT, nextmedia and its valued partners. We will not share your details with third parties.
Copyright © Alphr, Dennis Publishing
Tags:
app fad ipad iphone microsoft microsoft garage screenshot slack software tinder
By a Staff Writer
Nov 25 2015
5:09PM