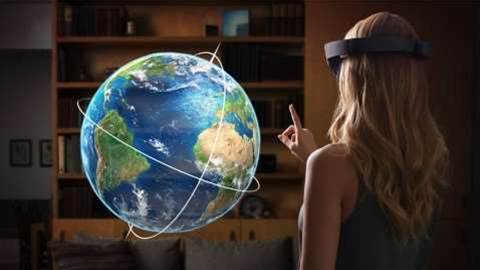 Can augmented-reality end up in business?

Microsoft is throwing more money behind the as-yet-unreleased HoloLens, by announcing a programme that will award funding to research projects aiming to find uses for its new device.

In a request for proposals, the company says it's on the lookout for projects that help “to better understand the role and possible applications for holographic computing in society”.

Microsoft will decide on “approximately five” research projects to receive a grant of US$100,000 (AUD$135,000) and two HoloLens development kits.

In a telling sign of how the US tech giant is envisioning the future use of augmented reality, Microsoft outlines a number of key areas it invites proposals from.

While Microsoft has previously shown signs that it values the HoloLens as a future gaming platform, this call for proposals indicates that the company is looking to seriously develop its augmented-reality platform for professional use – namely within business, medicine, journalism and education.

The grants are only available to researchers in the US, and proposals will need to come from accredited, non-profit, degree-granting universities or non-profit research institutions. Submissions close on 6 September, with the awards announced a month later on 6 October.

I have read and accept the privacy policy and terms and conditions and by submitting my email address I agree to receive the Business IT newsletter and receive special offers on behalf of Business IT, nextmedia and its valued partners. We will not share your details with third parties.
Copyright © Alphr, Dennis Publishing
Tags:
augmented reality hardware microsoft research grants research projects
By a Staff Writer
Jul 8 2015
2:21PM