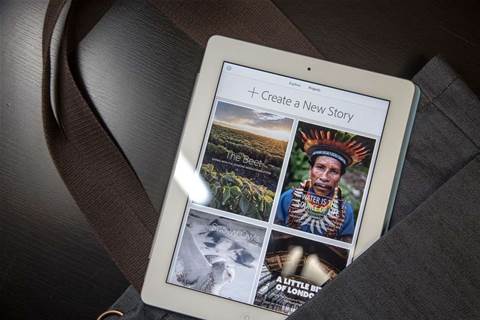 Adobe has unveiled Adobe Slate 1.0.2, a free iPad-only app that makes it possible to quickly generate online-hosted documents from a mixture of text and photos.

These documents are designed to look good in any browser or device, including phones.

The app follows on from last year’s Adobe Voice, which allows users to create interactive slideshow-based presentations containing a mix of video and audio.

Fire up the app and you can immediately see what’s possible by tapping one of the examples provided: a tablet-friendly mixture of text, imagery and subtle animations to lead the reader through the piece in question.

Next, you need to log in using an Adobe ID or your Facebook account, whichever’s easier. Then tap “Create a New Story” and you’re off. First, supply a title, then import your first photo – Adobe Voice users will know what to expect here, with options for finding and importing freely available photos from the web as well as your Dropbox folder among others.

Photos are automatically resized to fit the available space, you can then change the focal point, but you can’t zoom into or out of the image in question. Once done, you’re invited to scroll down, where you then build your story using a mixture of text, photos, photo grids and links (which are displayed as touch-friendly buttons). Tap an existing photo to replace or delete it.

It’s a shame there’s no option for importing text from another source; instead you’ll either have to manually type it in or pull in text from another app using copy and paste. You have a choice of heading styles, the ability to provide bulleted or numbered lists of information, plus include handy pull-quotes to spruce up large passages of text. Once you’ve reached the end of a section, insert a photo and select “fill screen”, which makes it serve as a suitable break.

The app supports a number of themed templates, which you can easily switch between without having to rejig your entire document. Once you’re happy with your work, you can choose to upload and share it publicly, or via private link – this link can be shared via social media or even embedded into a web page. One limitation is that the content is clearly marked at the bottom as having originated from Adobe Slate.

Adobe Slate suffers a little from a lack of fine-editing controls, but it does what it says on the tin – in an age where attention spans are diminishing and people are more and more pressured for time, it does a brilliant job of circling the square of making eye-catching newsletters, journals and other documents without wasting hours in the process.

Adobe Slate 1.0.2 is available now as a free download for iPads running iOS 8.0 or later.