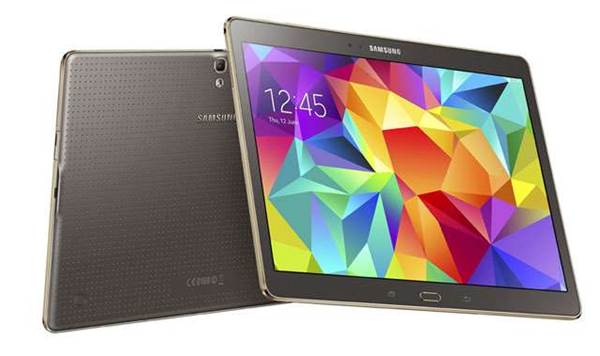 Samsung’s Galaxy Tab S 10.5 draws the eye right away with a stunning 10.5in, 2,560 x 1,600-resolution Super AMOLED screen. Apart from its sibling, the Galaxy Tab S 8.4, it’s the only tablet on the market to feature such a panel, and its sheer vibrance stops you dead in your tracks. Graphics and images jump out of the screen in a way that IPS displays don’t.

However, we had to tinker with the settings to get it looking its best. Watching movies and TV shows in the default “adaptive” mode produced uncomfortably lurid skin tones. Switching to the “basic” setting yielded much better colour accuracy without sacrificing punch and presence.

Although the Tab S’s screen is easy to fall in love with, it isn’t as bright as the best IPS displays. According to our colorimeter, the Tab S 10.5 goes up to 276cd/m2; IPS screens can hit 400cd/m2 or more. This won’t normally be a problem for indoor use, but in bright sunlight the Tab S will be less readable than, for example, the iPad Air. What’s more, AMOLED displays are susceptible to screen burn – depending on how you use it, the Tab S may not look so good a few years from now.

Regardless of the display, the Tab S is a beautiful device. It measures only 6.6mm thick and, at 465g, you’ll barely notice it in your bag; holding it up to watch a movie or read isn’t tiring at all. It isn’t quite as light as the Xperia Z2 Tablet, and lacks that device’s water-resistant sealing, but we found its rounded design more comfortable to hold for long periods. Our only minor moan is that the bronze-framed bezels – which, admittedly, look great – are so narrow that it’s tricky to pick up the tablet without accidentally activating the touchscreen.

On the plus side, the Tab S offers plenty of connectivity. There’s a microSD slot that will take cards up to 128GB in size; the micro-USB socket supports MHL output, to directly connect to MHL-equipped TV/displays; wireless stretches to dual-band 802.11ac; and an infrared transceiver means you can put the tablet to use as a giant universal remote control.

Disappointingly, you don’t get a stylus with this tablet, but a fingerprint scanner is built into the home button. This works in the same way as the scanner on the Samsung Galaxy S5 smartphone, although its positioning, along the long edge of the tablet, isn’t as convenient.
Inside the Tab S beats a Samsung Exynos 5 Octa SoC with eight cores (four running at 1.9GHz, four at 1.3GHz), alongside 3GB of RAM, a base storage allocation of 16GB and Mali-T628 MP6 graphics. This is the same specification as the larger Samsung Galaxy NotePRO 12.2; not surprisingly, it delivered similar benchmark results. The Tab S completed the SunSpider test in 478ms and recorded single- and multi-core scores of 741 and 1,769 in Geekbench 3.

In everyday use, however, everything is perfectly responsive. In our testing, we almost never saw the tablet slow significantly, and the fussy Magazine UX newsfeed was as smooth as butter. Battery life was impressive, too, with the power-efficient AMOLED screen paying dividends. In flight mode, with the display set to 120cd/m2, the Tab S 10.5 played 13hrs 26mins of video before hitting 5% capacity; the screen then dimmed automatically and the movie continued for a further 31 minutes. That’s a strong showing, beaten only by the Xperia Z2 Tablet’s 14hrs 38mins and the 16hrs 3mins of Amazon’s Kindle Fire HDX 8.9in.

The Tab S’s 8-megapixel rear camera, which is accompanied by a single LED flash, captures clean, clear stills and decent 1080p video as well. There’s also a front-facing 2.1-megapixel camera, but this isn’t as good. We weren’t impressed with the sideways-facing speakers, either, which aren’t particularly loud or full-bodied.

As usual, Samsung has skinned Android 4.4 with its TouchWiz front-end and preinstalled a long list of proprietary apps. Whether you approve of this is a matter of taste, but some of the bundled software is undeniably useful. Smart Stay, for example, keeps the screen on while you’re looking at it; Multi Window lets you line up two apps side by side; and the new SideSync feature allows you to drag files back and forth between the tablet and a Samsung Galaxy smartphone.

All in all, the Galaxy Tab S 10.5 is an excellent tablet. The screen is fabulous, performance and battery life are more than respectable, and the design is the very definition of svelte. Unfortunately for Samsung, the Sony Xperia Z2 Tablet offers even better performance and battery life – not to mention water-resistance. As a result, the Tab S narrowly misses out on a wholehearted recommendation.

This Review appeared in the October 2014 issue of PC & Tech Authority Magazine.

I have read and accept the privacy policy and terms and conditions and by submitting my email address I agree to receive the Business IT newsletter and receive special offers on behalf of Business IT, nextmedia and its valued partners. We will not share your details with third parties.
Copyright © PC Pro, Dennis Publishing
Copyright © PC Authority, nextmedia
Tags:
hardware review samsung galaxy tab s 105
By Jonathan Bray
Dec 19 2014
2:16PM