Office 365 vs Office Online: how do they compare? 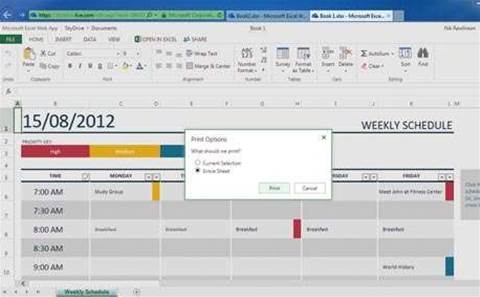 Can you get away with using the online version of Office - Office Online - instead of the desktop version?

Many users confuse the Office Online (previously called Office Web Apps) with Office 365. In reality, they’re a complementary service, free for anyone with a SkyDrive (now called OneDrive) account. Paying for Office 365 removes the ads, but at first glance there are few other reasons to pay $12 per month.

Office Online comprises Word, Excel, PowerPoint and OneNote, with Outlook hosted at www.outlook.com. The Excel Web App is augmented by Excel survey, which, allows you to collect data directly within a worksheet.

The apps’ interfaces are near-identical to their offline counterparts, with a slimmed-down ribbon and a generous range of fonts. Familiar tools such as highlighting, preset styles and even right-to-left text have survived the hop to the web, and each app includes a full range of context-sensitive menus on a right-click. ).

However, anyone used to the power features in Excel or Word will be frustrated. For example, the Data tab in the Excel Web App is limited to sorting data in ascending or descending order. PowerPoint is limited to four transition styles, with no pre-created templates.

As with Google Drive, you need to be online to use the Web Apps. Nothing is saved locally, although Microsoft does provide 25GB of free online storage.

The Web Apps work perfectly on the iPad, which is useful, since Microsoft hasn’t got around to shipping a tablet suite for anything other than the Surfaces. Oddly, Android tablet users can only view their files via Chrome, rather than edit them, although Microsoft promises a fix is coming. In the meantime, iPhone and Android users can create and edit documents using the free Office Mobile for Office 365 Subscribers apps.

Sharing your work is a breeze. You can either email invites or copy a link to your work into a regular message, and specify which rights the recipients have (edit or read-only), and whether or not they must log in with a Microsoft account. You can also embed read-only versions of a file in a web page, which anyone can view without a password or Microsoft ID. The collaborative editing tools are slick and responsive, with the cursor position updating for each user in real-time.

The surprising disconnect between commenting and collaborative editing is therefore as clumsy as it is inexplicable. Anyone who has editing access to a document can read, add and reply to comments – but only in the separate reading view. We prefer Google’s cleaner, unified approach.

You’ll have to use a workaround for printing from the Word Web App. This involves rendering your document as a PDF, which you can then open in your PDF viewer for printing. It’s an inferior solution to Google’s Cloud Print service, and far more hassle than sticking with Word on a PC. Excel, on the other hand, lets you output directly to printers.