BlackBerry Q10 reviewed: fantastic keyboard, but we prefer the Z10 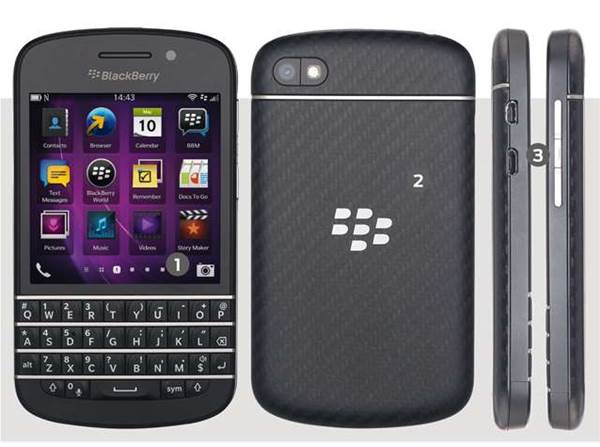 [While we mentioned the Blackberry Q10 when it was announced, we haven't published many other articles about it. Given that there are various Blackberry users out there, we decided to share this review with you. It was previously published earlier this year by PC & Tech Authority magazine.]
BlackBerry made its big comeback earlier this year with the Z10, but decided to hold fire on its keyboard-based Q10 until recently. Given the company is famed for its keyboard-based phones, it was an odd decision, to say the least.
Newsletter Signup

I have read and accept the privacy policy and terms and conditions and by submitting my email address I agree to receive the Business IT newsletter and receive special offers on behalf of Business IT, nextmedia and its valued partners. We will not share your details with third parties.
It’s here now though, and physically, it’s every inch the classic BlackBerry. We like the soft, rubbery rear panel which feels grippy, and there’s practicality in spades. The Q10’s rear panel is removable, revealing a replaceable 2100mAh battery and a microSDXC slot. Next to the micro-USB socket on the left, there’s a micro-HDMI output, for piping movies to your TV at up to 1080p and, of course, there’s the hardware keyboard.
The good news is that it’s superb. In typical BlackBerry fashion each key is shaped slightly, with the inward-facing upper corners raised. This makes them easier to locate with the thumbs, and the strip between each of the four rows helps to avoid mispresses. The click of each key is soft yet firm, leaving you in no doubt as to whether you’ve pressed one, and there are no annoying lips or ridges to cramp your style. This is BlackBerry at its best.
The Q10’s screen isn’t as good. The Super AMOLED panel delivers bright, deeply saturated colours, but it simply isn’t as readable as the Z10’s is in full sunlight. We measured it at a top brightness of 267cd/m2, compared to the Z10’s searing 715cd/m2.
The small, 3.1in size is also a problem. It’s the smallest display of any phone on test, and tasks such as browsing websites feel cramped. It feels a little awkward swiping from the bottom of the screen to back out of apps and get to the BlackBerry Hub, with your thumb brushing the top row of the keyboard as you do so. Some games don’t work well on the oddly-shaped, square display either, especially those needing extensive touch control, since your thumbs obscure the action.
Under the hood, the Q10 sports a powerful-sounding 1.5GHz dual-core TI OMAP 4470.
Unfortunately, it exhibits all the same flaws as the Z10. The OS gesture animations are fluid, but elsewhere things aren’t so rosy. Juddering frame rates ruin games, and our experience is reflected in the benchmarks. None of the scores come anywhere near troubling the top handsets this phone was compared with [this review was part of a group test of phones published in the August issue of PC & Tech Authority this year].
With an average battery-life score of 60% after 24 hours and a middling 8-megapixel camera to go with the problematic performance, the Q10 certainly can’t justify its premium price tag. The keyboard is excellent, and will prove a draw for BlackBerry devotees, but, for the most part, we prefer the Z10.
Verdict
A fantastic keyboard and BlackBerry 10 OS make the Blackberry Q10 a great phone for messaging, but it isn’t up to scratch in most other areas
Performance
Battery Life
Features & Design
Value for Money
Overall
Specs
$730 AUD
(pricing info)
Copyright © PC Pro, Dennis Publishing
Copyright © PC Authority, nextmedia
Tags:
blackberry hardware q10 review
By Staff Writers
Dec 19 2013
1:02PM