Microsoft OneNote's clever trick lets you copy everything on a whiteboard 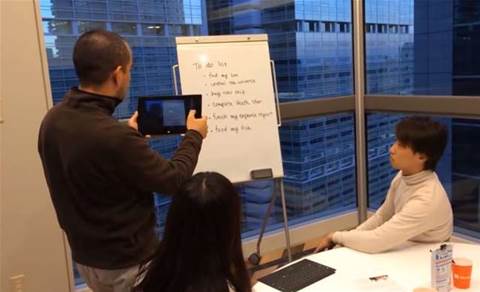 Sitting through a presentation and don't want to write everything down? This Microsoft OneNote feature might come in handy.

How many times have you been at a meeting or in a seminar where the presenter has put a bunch of interesting information on a whiteboard?

With OneNote, that information isn't lost. Microsoft recently announced what they're calling a "BIG" update to OneNote that makes it easier to capture data and make notes you've stored easier to find.

As the video below shows, the idea is that you take a photo of the whiteboard with your tablet. As well automatically cleaning up the images, OneNote can carry out Optical Character Recognition, or OCR. This means that the images are converted into usable text that can be copy/pasted, edited or searched for.

While you are probably familiar with the big boys of Microsoft Office - Word, Excel and PowerPoint - it's OneNote that sits out of the limelight.

A tablet or laptop running Windows 8 is the ideal device for using OneNote. A Microsoft Live account is also required and makes it easy to sync notes across multiple devices as well as access your information over a web browser using the OneNote web app.

I've been using OneNote on an original Surface Pro running Windows 8.1. The combination of a keyboard for typing, and the pen for annotating and drawing and the Share button that's available in the Windows 8 Charms menu (that's the menu you can open by either pressing Windows – C or swiping in from the right-hand edge of a touchscreen) makes it easy to grab information.

The OneNote option under Share in the Charms menu is very useful and works in lots of applications. For example, we could use it to capture recipes from the Food and Wine app, webpages from Internet Explorer or images from Bing Maps.

You can also take photos and add them to your notes.

All of those different types of information can be combined into a single note.

What are the alternatives?

OneNote is not the only unstructured information capture tool out there. Evernote is immensely popular, Google has Keep and there are many others out there from smaller developers.

I've been a long-time Evernote user as it covers off most of what OneNote manages. However, OneNote's pen input does stand out and is not matched by the others.

It would take a lot to make me shift from Evernote – mainly as I have thousands of notes and other bits of information already stored there. I use it with Windows, OS X and iOS devices and, while it has limitations, it makes my information easily accessible across multiple devices and platforms.

OneNote does all that with the addition of pen input and better image management. It's not enough to move me from my current platform but if you're new to these sorts of applications and have hardware that can do all that OneNote offers then it's well worth considering.