Lenovo advertising Android tablet for $1 with certain laptops on sale 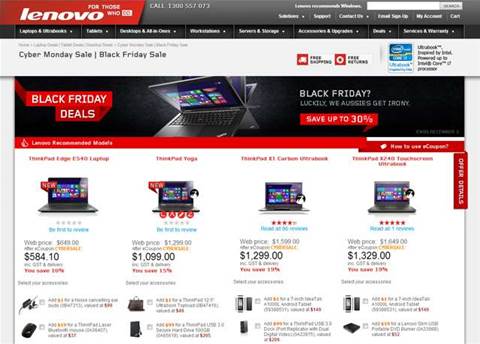 Lenovo is having a sale on certain ThinkPad laptops and is offering their IdeaTab 7-inch Android tablet for an extra $1.

Lenovo is offering up to 30% off on certain ThinkPad laptops and throwing in their IdeaTab 7-inch Android tablet for an extra $1.
While the IdeaTab isn’t exactly high-end, its official retail proce is $149.
Newsletter Signup

I have read and accept the privacy policy and terms and conditions and by submitting my email address I agree to receive the Business IT newsletter and receive special offers on behalf of Business IT, nextmedia and its valued partners. We will not share your details with third parties.
For $1,300, you can get the popular ThinkPad X1 Carbon Ultrabook (that's $300 off the regular price) with an IdeaTab Android tablet.
We also noticed $500 off the new ThinkPad T440s Touchscreen Ultrabook for $1,599 and $1,000 off the ThinkPad W530, now advertised for $2,499.30. You also have the option of adding the Android tablet for an extra $1 and Microsoft Office Business 2013 for an extra $99 on both these models.
The sale runs until midnight Monday.
Copyright © BIT (Business IT). All rights reserved.
Tags:
lenovo sale thinkpad
By Krishan Sharma
Nov 29 2013
12:23PM