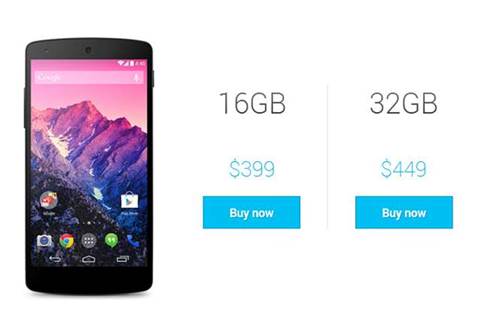 [UPDATE: The Google site currently statesit is "out of inventory" for the Nexus 5.]
Not only is the Nexus 5 cheaper than an iPhone at $399 plus postage (for the cheapest model), but it's arguably even more useful than the Nexus 4 because it now has 4G for faster Internet.
The previous model, the Nexus 4 was dubbed "superb" in this review, though one thing it lacked was 4G connectivity. The new Nexus 5 has 4G this time around, which could be very handy if you rely on your phone a lot for work and you're often using it for Internet access.
4G (sometimes referred to as "LTE") is a common feature of many high-end smartphones - it's been a feature of the iPhone since late 2012 when the iPhone 5 was introduced. The likes of Telstra and Optus have been setting up 4G networks around the country, and there have been predictions that eventually more than 80% of smartphones in Australia will be able to work on 4G networks.
4G is less common if you're spending less than $400 on a phone, though you can find phones with the feature, including Telstra’s Frontier pre-paid handset for $149, the LG Optimus F5 for $279 on Optus and the Nokia Lumia 625 for $312.
The Nexus 5 stands out because it is at the time of writing the only smartphone on the market that has the latest version of the Android operating system (4.4). It also has other relatively desirable features, including the latest high-end mobile processor (Snapdragon 800 2.3Ghz quad-core), 2GB RAM, a large 4.95-inch 1080P screen and an 8 megapixel camera with optical image stabilisation.
It’s also almost half the price of Apple’s cheapest 4G phone, the iPhone 5c, which currently costs $739 if you're buying it outright.
Newsletter Signup

I have read and accept the privacy policy and terms and conditions and by submitting my email address I agree to receive the Business IT newsletter and receive special offers on behalf of Business IT, nextmedia and its valued partners. We will not share your details with third parties.
Copyright © BIT (Business IT). All rights reserved.
Tags:
4g 5 cheap hardware nexus
By Krishan Sharma
Staff Writers
Nov 4 2013
10:51AM