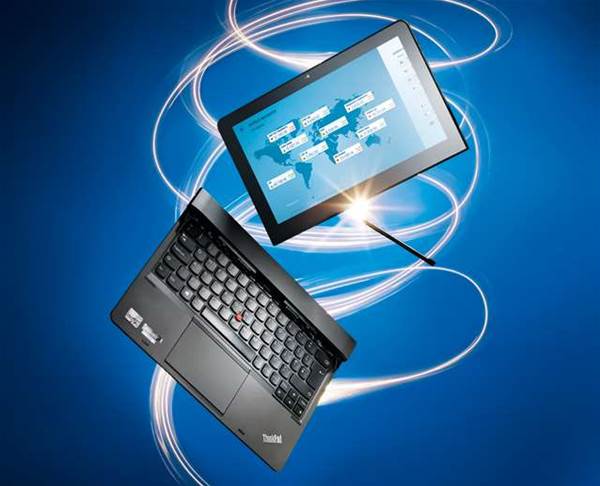 [As a premium brand laptop-and-tablet convertible, the Lenovo ThinkPad Helix was unlike many other laptops we'd seen when it first arrived - click here to see our impressions. Also below is a review which was published earlier by PC & Tech Authority magazine. We decided to share it with you here.]
While most Windows 8 hybrids have sought to capture everyone’s attention, Lenovo’s ThinkPad Helix is happy to appeal to a more select audience: it’s the first one to take aim at the business user. With the body of an 11.6in tablet, the heart of an Ultrabook and a nifty keyboard dock, the Helix is Lenovo’s vision of a hybrid that’s destined for the boardroom.
Newsletter Signup

I have read and accept the privacy policy and terms and conditions and by submitting my email address I agree to receive the Business IT newsletter and receive special offers on behalf of Business IT, nextmedia and its valued partners. We will not share your details with third parties.
At first glance, there’s no mistaking the Helix for anything but a traditional ThinkPad. It’s hewn from a slab of matte-black plastic, interrupted only by the occasional logo. There’s just the faintest hint of silver glitter in the finish, but with delicately tapered edges and a soft-touch rubberised feel to every inch of the chassis, this business-focused machine doesn’t draw attention to itself.
Business hardware is often synonymous with boring design, but this isn’t true of the Helix. It isn’t as slender as Lenovo’s ThinkPad X1 Carbon, but there’s a good reason for that: the Helix is a self-sufficient 11.6in tablet seamlessly mated to a keyboard dock. The tablet itself weighs 848g – a little less than the 908g Microsoft’s Surface Pro – and the keyboard adds 822g to the total. That sounds a bit much, but it crams a lot in, adding an extra battery, a couple of USB 3 ports and a mini-DisplayPort output.
Features and design 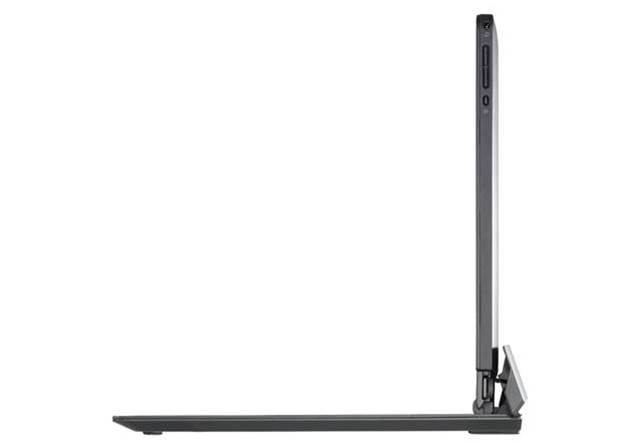 With the tablet slotted into the keyboard dock, the Helix masquerades as an alluring 11.6in laptop. The full-sized keyboard lacks depth compared to the best ThinkPads, but the subtly scooped-out profile of the Scrabble-tile keys grips the finger, and the wide channels separating the keys make it easy to build up a rapid touch-typing cadence. It’s far superior to the Type Cover of the Surface Pro.
The classic red trackpoint is set adrift in the keyboard’s centre, and there’s a huge, buttonless touchpad beneath. The only departure from standard ThinkPads concerns the trackpoint’s buttons, which are actually built into the top of the touchpad. Both work well, however, and since the touchpad is almost perfectly flush with the wristrest, Windows 8’s edge-swipes respond reliably to light flicks of the finger.
In laptop mode, the Helix’s display has a limited amount of backward tilt, which leaves the display sitting at a rather steep angle. It’s a compromise Lenovo’s had to make to stop the Helix toppling backwards too easily, but it’s far from unworkable. We had little trouble tapping out emails and reviews with the Helix sitting on our lap on a packed train carriage – it’s far more usable than the Surface Pro while out and about. Also, when you’ve finished working for the day, you can flip the tablet around and dock it backwards, turning the keyboard base into an adjustable stand.
If you depress the latch on the bottom left of the hinge, the tablet separates from the keyboard. Visually, it’s rather ordinary, but it’s sturdy and well appointed with features. Along the bottom edge, there’s a power input, a docking connector, a SIM card slot for the integrated 3G, a mini-DisplayPort output and a USB 3 port. There’s also a 3.5mm headset jack on the right-hand edge, alongside the volume controls and screen orientation toggle, plus a 2.1-megapixel front-facing camera and a 5-megapixel rear-facing one. Best of all, Lenovo has squeezed in a stylus that stows in the tablet, something none of its peers have managed to do.
Both touch and stylus input work without a hitch, with the stylus delivering reliable handwriting recognition and pressure-sensitive inking. The physical Windows button in the tablet’s lower bezel is a welcome sight, too – we much prefer this to the capacitive buttons found on tablets such as the Surface Pro. Our only complaint is that the stylus feels plasticky and lightweight compared to the Surface Pro’s, and may prove too thin for those with big hands.
The 11.6in, Full HD touchscreen is a stunner, though. Brightness and contrast aren’t as high as on the Surface Pro’s display, but they aren’t far behind. Colour accuracy is noticeably superior, and its combination of an almost-perfect colour temperature and accurate colour reproduction make for images that teem with lively yet realistic colours and ample detail. Most crucially of all, the colours remain true from almost any angle.
Performance 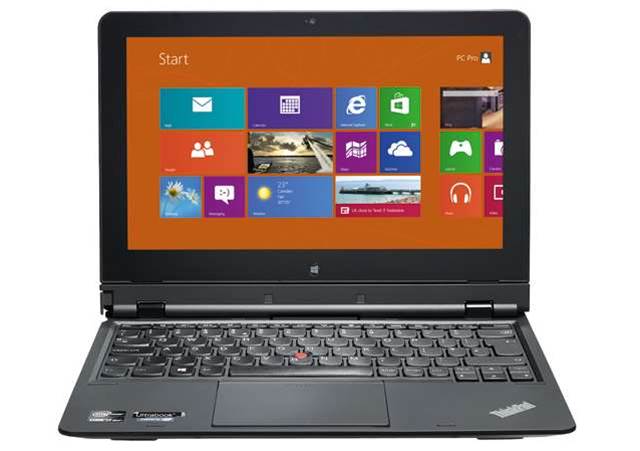 Beneath the matte-black surface, you’ll discover a familiar assortment of Ultrabook-class hardware. The cheapest model, priced at $1,750, partners a Core i5-3317U with 4GB of DDR3L RAM and a 128GB mSATA SSD, while the high end, $2,640 unit features a Core i7-3667U, 8GB of DDR3L RAM and a 256GB SSD. Lenovo also offers the ability to customise systems to your needs.
It’s disappointing the latest Intel Haswell CPUs haven’t made the grade, but performance remains spritely. Our review unit had the faster of the two specifications, and achieved a slower score than you might expect from such a nippy processor in our Real World Benchmarks. We suspect the limited cooling abilities of the Helix’s slender chassis are preventing the CPU from using Turbo Boost to its potential.
Despite the last-generation hardware, the Helix performed remarkably well in our suite of battery tests. On its own, the tablet survived 6hrs 47mins away from the mains in our light-use battery test – almost an hour longer than the Surface Pro. With the keyboard dock attached, it managed 9hrs 59mins.
Best for business? 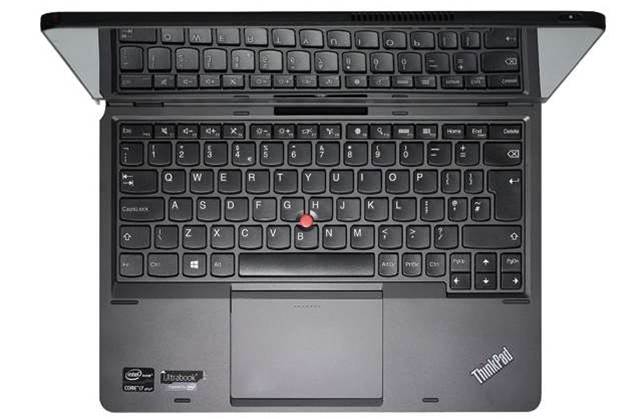 For all the Helix’s talents, there’s still room for improvement. The docking mechanism is the first quibble: it works fine, but it’s a long way from perfection. Once docked, the tablet is held securely, but you have to make a concerted effort to align the two guide tabs every time you slot it into place.

A further (minor) niggle is that the plastic flap at the rear that covers the mechanism feels a tad cheap – we wonder how long it would take for someone to accidentally snap it off while yanking the Helix out of a packed laptop bag.
By far the Helix’s biggest stumbling block is its price. Even the base model costs $500 more than a similarly-specified Surface Pro with the optional Type Cover. It’s easily the match of the Surface Pro in tablet terms, and it eclipses its rival by providing a genuinely usable laptop mode, but it’s still staggeringly expensive.
For the select few who can afford it, the ThinkPad Helix makes a convincing case for the business hybrid. Our advice is to wait patiently for a second-generation, Haswell-equipped model, but if you’re lucky enough to have an IT budget that can cope with the expense, this multitalented machine is sure to impress.
Verdict
The Lenovo ThinkPad Helix makes a convincing case for the business hybrid laptop, but it’s too expensive for a device that still has room for improvement. Read the review.
Performance
Features & Design
Battery Life
Overall
Specs
$2640 AUD
(pricing info)
Copyright © PC Pro, Dennis Publishing
Copyright © PC Authority, nextmedia
Tags:
hardware helix lenovo review surface thinkpad
By Sasha Muller
Oct 29 2013
5:09PM