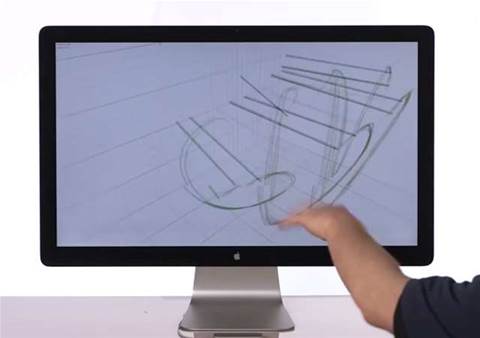 Leap Motion is now on sale at Dick Smith and could be of interest if you’re a designer, 3D graphic artist or CAD user

If you’re a  designer, 3D graphic artist or CAD user looking for a new of interacting with 3D objects and environments, then you might be interested to hear that a 3D motion control device, Leap Motion, is now on sale at Dick Smith for $129.

The accessory, which plugs into your computer using USB, is able to track the movement of your hands and fingers in the air with no visible latency.

Here is a video demonstration:


I have tested the device quite extensively since the product was first released back in July and it still very much feels like a work in progress with software updates being released quite regularly to improve the accuracy and consistency in the tracking capabilities which are areas that I still feel it falls short.

Using the device to navigate 3D environments and manipulate 3D objects feels very precise and natural - when it works.

At this stage, I see the device primarily appealing to designers, 3D graphics artists, CAD users and musicians but also educators as well.

Leap Motion comes with its own app store, Airspace, where you will find apps that take advantage of it.

For example, Autodesk have released a plug-in (http://area.autodesk.com/MayaLeapPlugin) for their 3D animation software, Maya, which allows users to perform in-app tasks such as 3D sculpting, camera control and virtual puppeteering using Leap Motion.

Corel have also released Painter Freestyle which allows users to create digital art using motion gestures. This one worked particularly well in my testing though it’s unlikely going to replace a dedicated graphics tablet for full-time designers. Here is a video demonstrating how this app works:

Laptop manufacturers such as HP and Asus will also be releasing Leap Motion embedded laptops and there could be potential here to augment existing touchscreen enabled laptops by using quick swipe motion gestures to switch between apps.