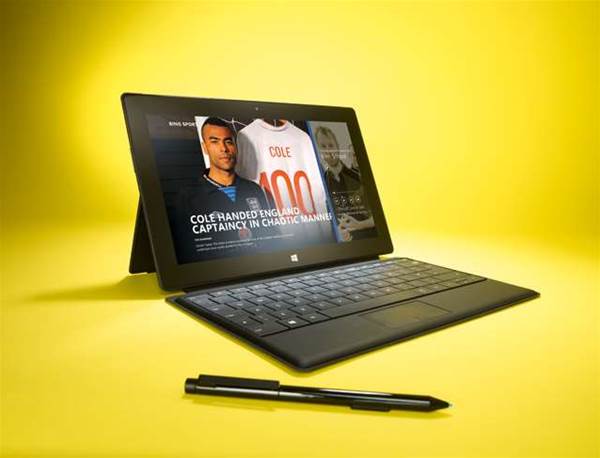 Good things come to those who wait, or so the saying goes, and Microsoft has finally brought its premium Windows 8 device – the Surface Pro – to Australia. It’s been available in the US since February, but Microsoft’s 10.6in tablet looks to have been worth waiting for.
Design 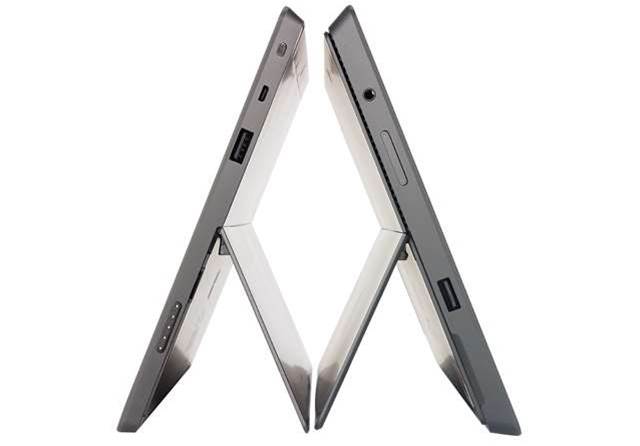 I have read and accept the privacy policy and terms and conditions and by submitting my email address I agree to receive the Business IT newsletter and receive special offers on behalf of Business IT, nextmedia and its valued partners. We will not share your details with third parties.
Although its appearance is similar to its stablemate, the Surface RT, the Surface Pro is a different beast entirely: it swaps Windows RT for Windows 8 Pro, adds the engine of an Ultrabook and tops it all off with a stylus-friendly Full HD touchscreen.
Physically, the Surface Pro is barely distinguishable from the RT, and that’s no bad thing – just like its cheaper sibling, the Pro oozes class. The metallic-grey body feels smooth to the touch, and the combination of chamfered sides and rounded edges make for a device that looks every inch the luxury tablet.
Look a little more carefully, however, and subtle differences begin to emerge. The more powerful components have swelled the casing, and the Pro’s 14mm-thick chassis is substantially fatter than that of the Surface RT. Consequently, it’s heavier, too, weighing in at 908g. That isn’t light by the standards of rival tablets, but the heft goes hand in hand with stunning build quality: no matter how much you twist or squeeze the Surface Pro’s chassis, there’s barely any flex to be found.
The 10.6in screen is stunningly crisp. Colours are rich and saturated, viewing angles are wide, and with a brightness of 446cd/m2 and a contrast ratio of 910:1, photos and movies look fantastic. Colour accuracy isn’t as good as the finest Ultrabooks we’ve seen, such as the Dell XPS 13, but it’s one of the best screens on a Windows tablet, and the 208ppi pixel density makes for almost-Retina levels of clarity.
Core hardware 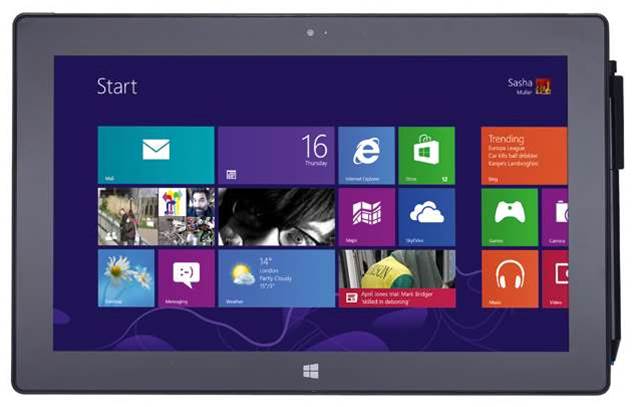 Behind the stunning screen and classy chassis, there’s a familiar set of components. The Core i5-3317U processor is one we’ve seen in many Ultrabooks, and along with 4GB of RAM and an SSD, the Surface Pro feels sprightly by tablet standards. An overall score of 0.63 in our Real World Benchmarks doesn’t match the fastest Ultrabooks, but it’s more than quick enough for most people’s needs. In fact, the only thing we’d wish for is more RAM – as it’s impossible to upgrade any of the Surface Pro’s components, 8GB of RAM would have been a welcome future-proofing measure.
Peer around the edges, and there’s sparse connectivity. There’s a single USB 3 port, a microSD slot, a 3.5mm headset jack and a mini-DisplayPort output. There’s no Ethernet socket, but Microsoft has attempted to make amends by squeezing in dual-band 802.11n Wi-Fi and Bluetooth 4.
We’re a little underwhelmed by the front- and rear-facing cameras, however – the meagre 1-megapixel sensors are simply incapable of dredging up the detail of higher-specified rival devices.
Squeezing Ultrabook components into such a compact chassis does have its downsides. Battery life is the most pressing concern, and here the Surface Pro’s 42Ah battery struggles. Even with the display brightness dimmed down to 75cd/m2, and Wi-Fi off, the Surface Pro lasted for 5hrs 52mins in our light-usage battery test. Turn on Wi-Fi, raise the screen brightness and start multitasking, and you can expect that to fall sharply.
Another downside of the nippy CPU is that the Surface Pro’s slim chassis struggles to stay cool. Indeed, while the sliver-thin cooling vent stretching around the top edge is impressively subtle, the Surface Pro’s fans are less so. Push the processor hard, and the cooling fans spin up with a soft but audible whine, and the metal chassis heats up to match.
In everyday use, though, the powerful components are slick and responsive. Applications spring into life in a blink of an eye, and whether we were scribbling in OneNote or doodling in Fresh Paint, the stylus and Wacom digitiser worked impeccably.
Windows 8’s excellent handwriting recognition does an amazing job of recognising the most malformed of squiggles, and, in compatible applications, the Wacom digitiser’s pressure sensitivity works well, too. When it isn’t in use, the stylus snaps neatly onto the right-hand edge, clipping into the magnetic power socket – it’s a lovely little touch.
Splash out on the optional $149 Type Cover (which works with both the Surface RT and Pro models) and the Surface Pro also does a passable impression of a laptop. We’re still not huge fans of the Type Cover’s tiny touchpad, but given the excellent stylus and responsive touchscreen, it’s a frustration we can live with. And more importantly, as a keyboard it’s very usable. The wide, square keys are easy to get used to, and there’s just enough travel to make for comfortable touch typing.
In fact, the only downside comes when you want to use the Surface on your lap: as with the Surface RT, the combination of the narrow kickstand, heavy tablet and lightweight keyboard is rather top-heavy. It’s manageable but far from comfortable, and we found ourselves wishing we could tilt the kickstand back and forth to adjust the angle at which it sat on our lap.
Verdict
None of this comes particularly cheaply, either. While the 64GB model weighs in at $999, the 128GB model costs up to $500 more – as much as a fully fledged Ultrabook. And as Microsoft hasn’t bundled the Surface Pro with either of the optional Type or Touch covers, you’ll need to shell out for one of those, too – unless, of course, you already own a Surface RT, in which case you’ll be glad that the covers are interchangeable. And then there’s the fact that, with Haswell here, these tablets are now behind the processing curve.
Stop to consider what you’re getting, however, and it isn’t bad value for money. The hardware is impeccably constructed, the performance strong, and the Wacom digitiser, stylus and Full HD display make for a great combination.
The ergonomic irritations in laptop mode, together with modest battery life, mean it won’t suit everyone, but the Surface Pro is a great choice for those who want power and full Windows compatibility in such a tiny device.
Have you seen a hybrid laptop? Click to see the Lenovo Thinkpad Helix: Is this the future of business laptops?
By the way: if you're buying a Windows tablet should you get Core, Atom or ARM? Click to read more.
Verdict
The Microsoft Surface Pro is a stylish, powerful Windows 8 tablet that remains desirable despite its flaws. Read the review.
Performance
Features & Design
Value For Money
Overall
Specs
$1099 AUD
(pricing info)
Copyright © PC Pro, Dennis Publishing
Copyright © PC Authority, nextmedia
Tags:
hardware microsoft pro review surface tablets
By Sasha Muller
Aug 12 2013
11:47AM