Why would you buy a Mac Pro instead of an iMac? 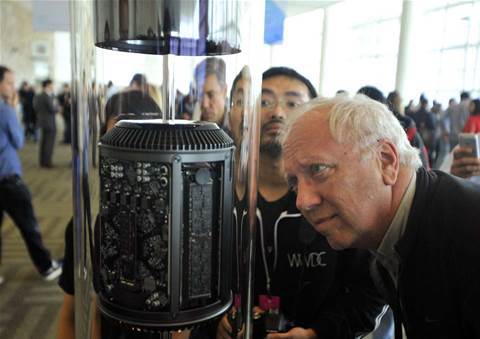 Apple's odd-looking new Mac Pro packs more grunt than ever, but why would you buy a Mac Pro instead of an iMac?

Apple this week unveiled a glimpse of its next generation Mac Pro (click here to see the photos). while not on sale yet, and a price not yet announced, the machine is getting a lot of attention with its odd-looking cylindrical design.
So why would you buy a Mac Pro, instead of an iMac?
Newsletter Signup

I have read and accept the privacy policy and terms and conditions and by submitting my email address I agree to receive the Business IT newsletter and receive special offers on behalf of Business IT, nextmedia and its valued partners. We will not share your details with third parties.
There are three desktop Macs in the lineup; the Mac mini, iMac and the Mac Pro. The elegant iMac is all about style, focusing on a super-slim design while stripping out features and limiting upgrade options. Meanwhile the Mac Pro is all about substance and raw grunt.
In terms of processing power the Mac Pro is in a class of its own. The current entry-level model comes with a 4-core or 6-core Intel Xeon processor, while the high-end model packs two 6-core Xeon processors. It also supports up to 64GB of RAM and one or two Intel Radeon graphics cards.
Yet the iMac is no slouch and with the option of a quad-core i7 processor can easily handle everyday needs and even serious multimedia work. Its NVIDIA GeForce GT 650M graphics chip - designed with notebooks in mind - is perhaps its Achilles' heel.
Even so, in terms of grunt alone it would be hard to justify putting a Mac Pro on a staff member's desk unless you're building a dedicated high-end video editing suite or crunching big numbers as part of a scientific or engineering project. Alternatively you might deploy it as a high-end server.
Another limitation of the iMac is that it's basically a computer built into the back of a 21.5 or 27-inch Apple monitor. Meanwhile the Mac Pro gives you the option to go with a third-party monitor. You might opt for a larger 30-inch monitor, or perhaps a monitor with more advanced calibration options for high-end design work. Alternatively you might simply want a monitor with a range of video inputs, for connecting up other computers or AV equipment. The iMac's Thunderbolt port lets it act as a secondary display for another Mac, but you can't plug in anything else.
The Mac Pro's other strength is its expandability - with its tower design making it much easier to upgrade internal components than on an iMac. The latest super-slim iMacs don't even feature an optical drive, although it is possible to use an external USB DVD drive.
The current tower-style Mac Pro does feature a DVD burner and it's easy to add another as well as upgrade the graphics card, hard drive and RAM. You will also find four Firewire 800 ports, five USB2.0 ports, two Gigabit Ethernet ports and a MiniDisplay port. The tower-style Mac Pro hasn't been upgraded to offer Thunderbolt or USB3.0, leading to speculation that Apple was planning to kill it off completely before the announcement of the new Mac Pro, sporting an unusual cylindrical design. The new cylindrical Mac Pro, expected to be released later this year, adds Thunderbolt 2 and USB3.0 ports but ditches the DVD drive.
Along with four hard drive bays in the current Mac Pro you'll find three PCI Express 2.0 expansion slots. These are useful for extra graphics cards or to add eSATA and USB3.0 ports, or to connect the Mac to super-fast Fibre Channel storage or an Xsan network. You'll also find Solid State hard drives designed to slot straight into a PCIe slot.
The new Mac Pro, sporting an unusual cylindrical design, lacks PCI Express slots and it remains to be seen how difficult it will be to upgrade other components.
Copyright © BIT (Business IT). All rights reserved.
Tags:
apple hardware imac mac pro which
By Adam Turner
Jun 12 2013
11:40AM