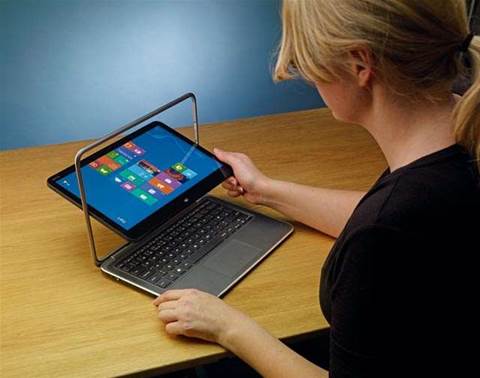 New hybrid laptops are part laptop, part tablet computer. But are they right for you? Click to find out more.

Laptop manufacturers are dreaming up a wave of bold, new designs.

The article below looks at how easy they are to use in different environments: at work, on the sofa, on the train, or even standing up.
Of all the portable device form factors, the hybrids are the most interesting. They can be used for the full tablet experience: you can hold them in one hand, with only the touchscreen on show.
Newsletter Signup

I have read and accept the privacy policy and terms and conditions and by submitting my email address I agree to receive the Business IT newsletter and receive special offers on behalf of Business IT, nextmedia and its valued partners. We will not share your details with third parties.
They all have keyboards, too, but with no consensus on what makes a good hybrid mechanism, every device seems to do things differently. We have sliding, swivelling, rotating and flipping screens - there’s plenty of experimentation, with manufacturers hunting for that elusive design that just works.
Slide 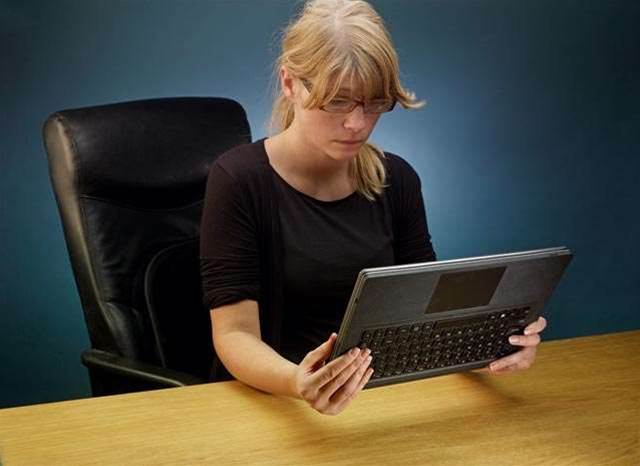 The most radical departure from the standard laptop shape comes from the sliders. The Toshiba Satellite U920t and Sony VAIO Duo 11 take a similar approach, with the laptop screen sliding across the keyboard to form a tablet. Which design you prefer will depend on how much you like touchpads.
The Sony does away with a touchpad entirely, bringing the keyboard to the front edge of the base. Typing on it isn’t too onerous on a desk, but the removal of the wristrest gives it an odd imbalance on a lap – you quickly realise the role your wrists play in keeping a laptop steady. The screen slides upwards on a spring-loaded hinge that can be set only at a fixed angle, so particularly short or tall people may find it difficult to get comfortable.
The Toshiba’s design is less sleek and stylish, and the hinge more cumbersome in operation, but arguably it makes more sense. It feels solid, it’s flexible in its screen angles and, importantly, gives just enough of a wristrest for it to feel comfortable in any mobile situation.
The problem is that the more flexible design means an extra 200g in weight, and that makes the Toshiba a pretty hefty tablet – it’s more than twice the weight of the Surface, for example. That kind of bulk is okay for short periods, but holding a 1.46kg lump in one hand soon becomes a chore.
Twist 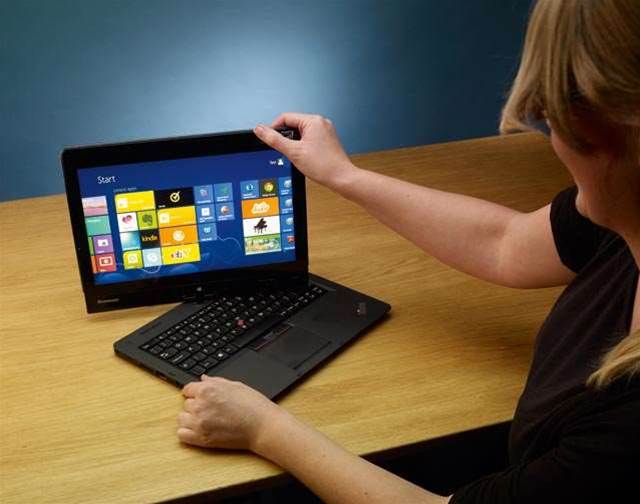 Space and comfort in laptop mode isn’t something with which the Lenovo ThinkPad Twist has a problem, but there’s something a touch archaic about its twisting hinge mechanism. There’s a reason manufacturers have done their best to come up with better ways to flip between modes than those we used a decade or more ago with the original wave of Windows XP Tablet Edition devices.
The motions required to swivel the Lenovo’s screen round 180 degrees then fold it down flat aren’t easily performed in the confines of a train seat – and even when in one mode or the other, the hinge never holds things precisely in place. The whole screen turns slightly as you adjust the angle in laptop mode, and when clipped into its grooves in tablet mode, it comes away from the base at the slightest pressure. It never feels totally secure, which is the one thing a hybrid should be if it’s to be held in one hand.
Swing 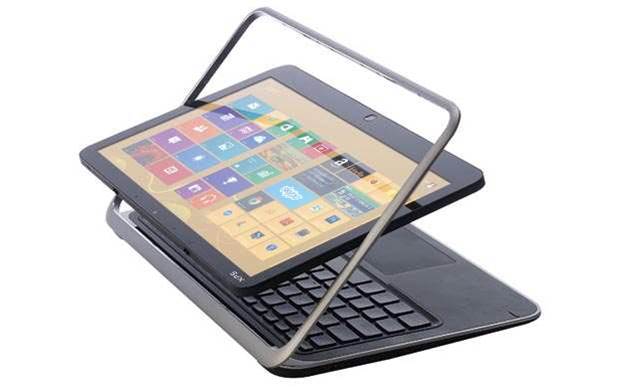 Dell’s XPS 12 also has an element of insecurity to it. It’s initially disconcerting to see a gap between the display and its silver bezel, and we almost had a heart attack the first time we opened the lid and inadvertently popped the screen loose. However, it’s actually a rather logical design.
Switching from laptop to tablet mode requires no more than a few inches of space behind the screen, so even in a cramped space it’s a simple task: just flip the screen and close the lid. With a bit of practice, you can switch modes in a single smooth action. Although it’s no lighter than the others here, its rounded edges and rubberised back mean it at least feels comfortable in tablet mode.
Flip
One of the more fascinating implementations of a hybrid design received a lot of hype over the course of 2012, but isn’t available in Australia. We are referring to the Lenovo IdeaPad Yoga 13, which is still worth looking at in an overview of form factors, if only because its success overseas will likely translate into other companies attempting a similar hybrid design in the not too distant future.
The Yoga name fits perfectly. Open the lid into laptop mode; open it more until it begins to fold back on itself – it can then be placed with the screen upright, or standing on its edges in what Lenovo calls “tent” mode; and the final push snaps it right back on itself to become a straight tablet. The hinge that enables the range of motion is cleverly designed and well implemented, and the whole design has a premium feel.
Lenovo’s advertising really pushes its four distinct modes, some of which work well. Flipping the keyboard underneath to form a kind of standing tablet means the base extends quite far to the rear – no pushing this one up against a wall. The tent mode works slightly more neatly to achieve the same purpose, but the full tablet mode leaves your fingers awkwardly resting on the keys and touchpad on the rear. They’re automatically disabled, and the keys are recessed to line up with the frame on either side, but during our time with an imported unit we felt uneasy putting the Yoga down on hard surfaces for fear of damage.
Twin
From purely a usability perspective, the frontrunner has to be the Asus Taichi 21. While all the other hybrids here find elaborate ways to shift a screen from one position and orientation into another, the Taichi slaps a second screen on the lid. There’s no worrying about how to convert when you’re crammed in on the train; you just close it. Often the most obvious solution is the best.
It can’t quite get past the same hang-ups as the others – although it’s the lightest here, 1.25kg is still a bit much for a handheld – but it can be used effectively on a lap or a desk, or while standing up, with a simple transition between the two. It feels like the most logical design from the user’s perspective, but its insurmountable issue is that using two screens pushes up the price.
Compromise 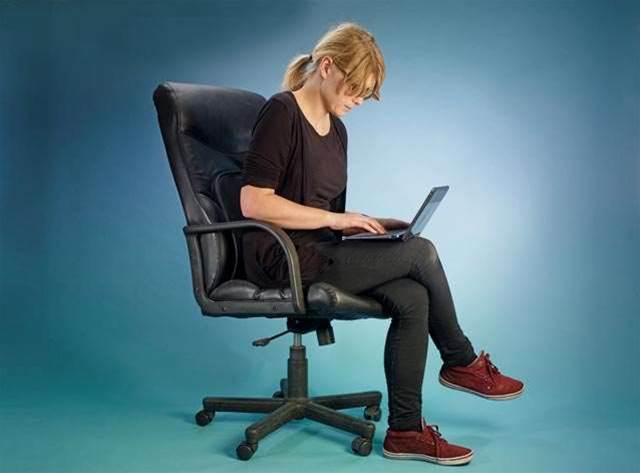 None of the hybrid form factors here can truly claim to get everything right. A sliding screen is easy to handle on the move, but comes with a reduction in laptop comfort. The ThinkPad Twist is hard to convert; the Yoga gives you that awkward feel of keys under your fingers as you hold it; the Taichi’s two screens take their toll on your wallet. And the big problem all hybrids have is their tablet weight. They are all heavier than a standalone tablet would be, which is fine if all you are doing is using it in tablet mode while on the lounge or sitting at a table. However you won’t want to carry them one-handed in tablet mode for long, as the weight does become more and more noticeable when you do.
If you accept there will be compromise, however, the hybrid can offer power and versatility. There’s no denying they work best as laptops – the weight will have to come down before we’d put their tablet modes in the same bracket as a standalone device – but they do at least allow both sides of Windows 8 to shine. The problem for now is that a touchscreen laptop does too, and so does a tablet with a removable keyboard – and they’ll both cost you considerably less than one of these hybrids, even if they don’t have the same ‘wow’ factor of a laptop that deftly swings or swivels into a tablet.
Copyright © Alphr, Dennis Publishing
Tags:
dell duo 11 hardware hybrid laptop sony toshiba u920t vaio xps 12
By Staff Writers
Apr 19 2013
2:21PM