Is the new Sony Xperia Z the phone you need for working in the rain? 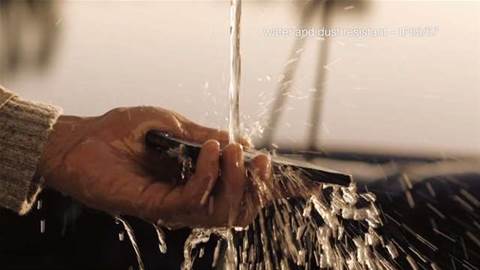 Meet the new water resistant Sony Xperia Z. It works in the rain and you can hold it under a running tap.

One of the most interesting things about the new Sony Xperia Z phone, which Optus announced is available on its 4G network from today, is that it is "water resistant".

Take a look at the two videos below, which show people dunking the phone in a jar of water, then picking it up and using the touchscreen while the phone is still wet.

I have read and accept the privacy policy and terms and conditions and by submitting my email address I agree to receive the Business IT newsletter and receive special offers on behalf of Business IT, nextmedia and its valued partners. We will not share your details with third parties.
Obviously having a phone that works in the rain could be extremely handy if you work outdoors. But “water-resistant” means all sorts of things. What does it really mean here?
Sony's official promo video also shows someone pouring water on the phone being used in the rain. And we've seen a Sony Australia executive deliberately drop an Xperia Z into a jug of water while appearing on Sky Business's 'Technology Behind Business' show, but we weren't shown it work afterwards.
Sony's spec sheet for the Xperia Z says it is rated IP55/IP57. What does that mean? IP (ingress protection) ratings indicate the degree of protection against solid objects (the first digit) and liquids (the second digit).
For the Xperia Z, the first digit is 5, which means the casing may not keep all dust out, but it is sufficiently dustproof to allow normal operation.
When it comes to liquid ingress, the 5 rating means the casing can withstand a 30kPa water jet from a 6.3mm nozzle 3m away for at least three minutes - so you should be ok for moderately brief use even in the pouring rain. To get a 6 rating, the item must withstand a far more powerful jet.
The 7 rating means phone can be submerged in up to 1m of water for up to 30 minutes without ill effect, according to Sony, which means dropping an Xperia Z into the sink or bath should in theory be ok.
If you want to see other videos of the phone being dunked and surviving, there are several clips on YouTube, including these two:
We also note the Australian Financial Review tested the Xperia Z in a bath, and it kept working.
One thing to keep in mind is that the covers for the various sockets need to be closed to keep the water out.
Also, the Xperia Z is not an "underwater" device - apart from only being tested to 1m, capacitative touchscreens apparently can't distinguish between water and a finger.
Copyright © BIT (Business IT). All rights reserved.
Tags:
hardware phone rain resistant sony water water proof waterproof xperia z
By Daniel James
Mar 18 2013
1:37PM