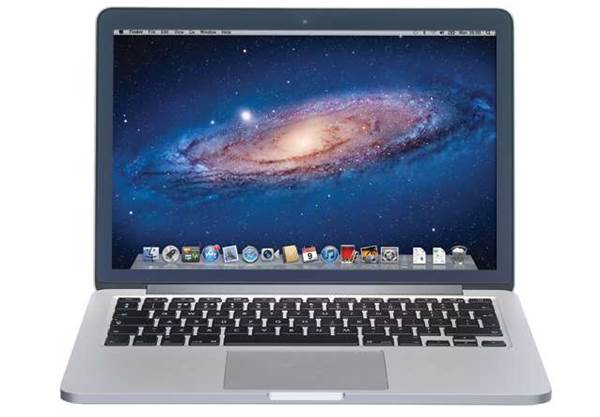 With the Apple 13in MacBook Pro's metal unibody chassis shrinking to a mere shadow of its former self, and a Retina display cramming in more pixels per inch than any laptop we’ve ever seen, Apple has rung the changes. 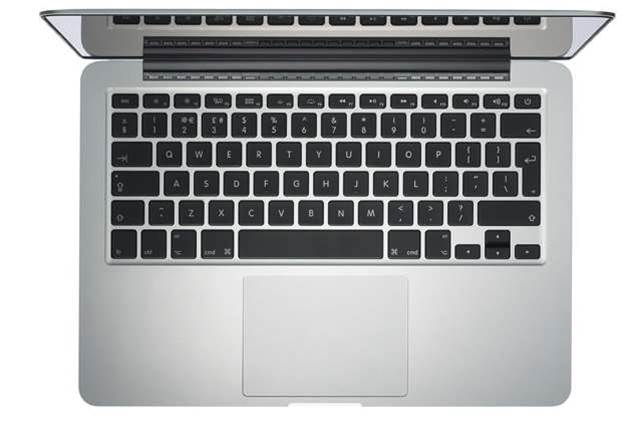 I have read and accept the privacy policy and terms and conditions and by submitting my email address I agree to receive the Business IT newsletter and receive special offers on behalf of Business IT, nextmedia and its valued partners. We will not share your details with third parties.
The build quality is as impeccable as ever, but dispensing with the optical drive has made all the difference. It weighs 1.63kg and measures 19mm thick, and it’s more than 400g lighter than the old model.
Throw the MagSafe 2 power adapter in your laptop bag, and the total travelling weight comes to 1.88kg.
The 13.3in display is the centre of attention, though. The 1280 x 800 resolution of last year’s model has quadrupled to a pin-sharp 2560 x 1600 pixels.
The MacBook Pro 13in makes the most of its Retina display, thanks to OS-wide scaling.
With the display set to the default Best for Retina setting, desktop elements such as icons and text remain the same size as those on the standard model’s 1280 x 800 resolution panel, but are composed of four times the number of pixels.
The extra pixels mean text and icons are razor-sharp, and the finest detail in high-megapixel photographs is revealed without the need to zoom right in.
Bump the resolution above the Best for Retina setting, however, and the 1440 x 900 and 1680 x 1050 equivalent resolution options provide a larger desktop.
It isn’t only the pixel count that’s improved. Colour accuracy is better than that of last year’s model. Viewing angles are wide and images burst forth with natural yet saturated colours. There is a tendency to crush dark greys into black though.
Specifications

Inside, there’s no sign of the quad-core CPUs seen in the 15in Apple MacBook Pro with Retina.
Instead, there’s the choice of two dual-core parts, with a 2.5GHz Core i5 fitted as standard, or a 2.9GHz Core i7 available for a $235 premium.
All the Retina models have 8GB of RAM, the base model sports a 128GB SSD, and the upgrade to a 256GB drive costs an extra $300.
Equipped with the Core i5, 8GB of RAM and a 256GB SSD, the MacBook Pro achieved 0.73 in our Real World Benchmarks.
Battery life is excellent, too. With a 64-bit Windows 7 installation running in Boot Camp, the MacBook Pro lasted 8hrs 54mins in our light-use battery test. With the same test running in OS X, it lasted 9hrs 56mins.
One feature sorely missing, however, is dedicated graphics. Even the scaling demands of the Retina display taxed the integrated GPU, with stuttering evident while scrolling through image-heavy web pages and occasionally jerky desktop animations. The cutting-edge display clearly pushes the CPU and GPU to the limit.
Both the keyboard and glass touchpad work beautifully, but connectivity won’t please everyone. There are two USB 3 ports, two Thunderbolt ports, an SD card reader and an HDMI output.
Ethernet is absent, however, and while dual-band 802.11n Wi-Fi and Bluetooth 4 are welcome, many will be forced to spend $35 on the Thunderbolt to Ethernet adapter.
Conclusion
This isn’t a MacBook for the average buyer - the Retina display is overkill for most people, and the price premium is substantial.
If, however, you’re a creative professional who is constantly on the move, then the appeal is obvious.
With a glorious high-DPI display crammed into a 1.63kg chassis, Apple’s new MacBook Pro is one of a kind.
Verdict
If you’re a creative professional who is constantly on the move, then the appeal of the 13in Apple MacBook Pro with Retina display is obvious. Read the review.
Performance
Features & Design
Value For Money
Overall
Specs
128GB $1899 AUD
256GB $2199 AUD
(pricing info)
Copyright © Alphr, Dennis Publishing
Tags:
13inch apple hardware macbook pro retina review
By Sasha Muller
Feb 6 2013
1:20PM