The good and bad: A review of the Microsoft Surface with Windows RT 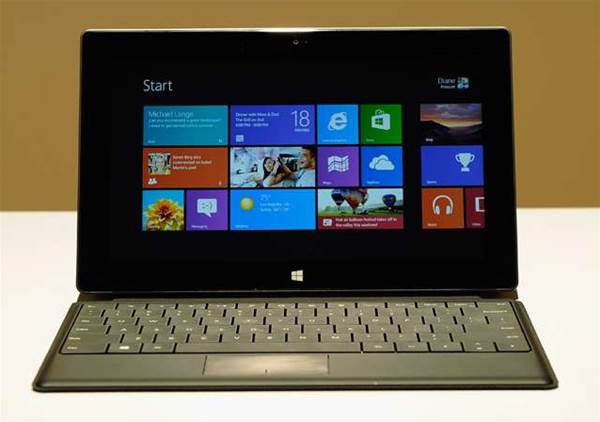 There’s no doubt that the Microsoft Surface is a serious tablet, but is it good enough to tempt people away from their iPads, their Android tablets, or even their laptops?

Or is it a stopgap until the fully-fledged Windows 8 versions of the Surface tablet arrive to complement this ARM-based version? 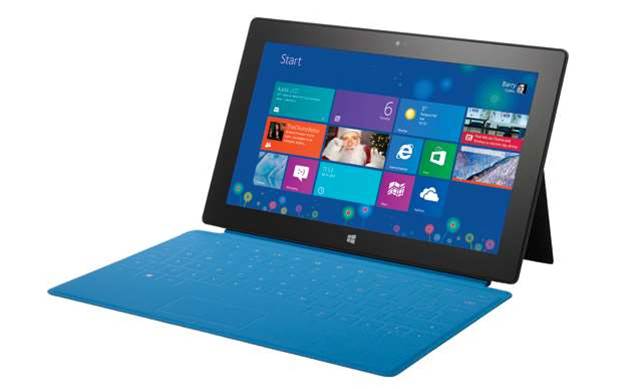 Two features make the Surface stand out from the uniform slabs of glass we’ve witnessed over the past couple of years: the kickstand and the detachable keyboards (see below for more on the latter).

The mechanics of the kickstand are beautifully simple. The bottom half of the back of the tablet casing flicks out to create a stand for the tablet, turning the device into a pseudo-laptop when used with one of the keyboards.

When you’re finished with the stand, it flips back into place, perfectly flush with the back of the tablet, and with the satisfying clunk of an expensive car door.

However, the stand is set at a fixed position, leaving no means of adjusting the angle of the screen as is possible with a conventional laptop.

That left the taller members of the team awkwardly hunched over the Surface as they attempted to work with the device at a desk; although our more modestly sized colleagues had no complaint.

That slightly-too-upright angle would be a much bigger problem if the 10.6in screen wasn’t so sparkling. Viewing angles are excellent - although perhaps a little too good for snoopers in an adjacent train seat.

A maximum screen brightness of 400cd/m2 is comparable to that of the iPad, and while the Surface has a measured contrast ratio of 3333:1, it’s due to the presence of dynamic contrast. Flick between dark and bright pages, and it’s possible to detect the backlight raising and lowering brightness to compensate.

Still, the IPS panel guarantees that the palette of bright colours that make up the Windows 8 Start screen zing off the display, and that photos and video deliver sumptuous levels of saturation.

The 1366 x 768 resolution isn’t going to give Apple’s engineering department cause to shamefacedly return to the drawing board, but when you’re sitting a foot or so away from the Surface screen it doesn’t lack detail or sharpness.

The tablet feels delightful to hold in the hand, too. There’s much marketing waffle around the so-called VaporMg material that forms the casing, but it feels robust and smooth to the touch. The charcoal-black design is commendably understated, with only a subtle Windows logo adorning the rear.

At 682g (without a keyboard), it’s only a shade heavier than the third-generation iPad, and even with a keyboard case attached, it’s much lighter than most ultraportable laptops. And at no point does the Surface become uncomfortably warm, either. 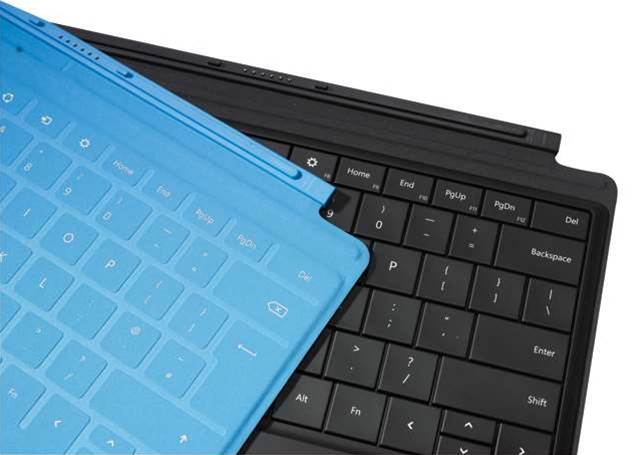 There are two types of keyboard for the Microsoft Surface. The Touch Cover is a halfway house between a software keyboard and the rubber-keyed wonder of the old 48K Spectrum. There’s no tactile feedback when you touch the keys – instead you’re forced to keep your eyes glued to the screen, or turn up the volume and listen for the clicky key sound.
Our first instinct was that typing on the Touch Cover would be a terrible experience, but we were pleasantly surprised. While we didn’t quite get up to full lick, we found our regular typing speed wasn’t massively hampered, and even the small trackpad surface beneath the spacebar proved responsive and accurate.
The Type Cover is our favourite of the two, though. This has proper, well-spaced keys that deliver a decent amount of travel. Within minutes we were back up to full laptop typing speed, and creating plenty of noise – the keyboard is a touch rattly.
It also has a set of dedicated function keys (F1, F2 and so on). These are accessible only on the Touch Cover as a secondary option, behind the top row of Windows 8-specific control buttons (volume controls, Charm shortcuts and so on).
The trackpad is functional and responsive, but as with the Touch Cover’s trackpad, there’s no support for gestures, which is disappointing.
The Type Cover is a bigger letdown when you attempt to use the Surface on your lap. Its base is too flexible, often causing the keys on the edges of the keyboard to stop responding.
We found the Touch Cover more reliable with the Surface resting on your lap, which is worth considering if you spend much of your time tapping away in airport lounges or crowded commuter trains.
The price of both keyboards is a little steep for our liking:
The 64GB model ($789) has a Touch Cover, with the Type Cover again adding $150 to the price.
Why Microsoft is forcing 64GB owners to pay the full amount for the Type Cover instead of a small premium is baffling. A total price of $938 for the 64GB Surface RT and Type Cover – our preferred specification – is far too high. 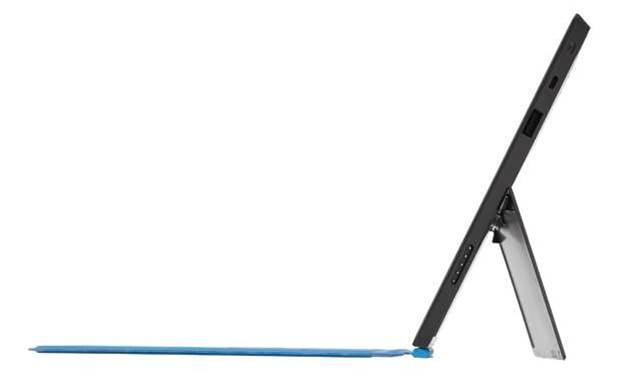 Connectivity and expandability are other strong suits for the Surface. On the right-hand side of the tablet you’ll find a micro-HDMI port, for which Microsoft has created a pair of optional adapters ($45 each) for running external displays via HDMI or VGA.

Unlike iPads or Android tablets, Windows RT allows you to extend your desktop to a secondary display rather than merely mirroring the tablet screen, which is a huge bonus when it comes to getting down to work.

Beneath the micro-HDMI there’s a USB 2 port, which can be used to plug in all manner of peripherals, including external hard disks, mice, digital cameras and even printers - a full list of Windows compatible devices is here.

We plugged in all manner of devices, both new and old, and the only one we struggled to get working was an ageing Fujitsu scanner - and that has driver issues with Windows 7 too.

If you don’t want to waste a USB port on an external mouse or keyboard, the Bluetooth 4 support allows you to use wireless versions at your desktop. Elsewhere on the wireless front, there’s dual-band 2.4GHz and 5GHz Wi-Fi.

One curious omission, however, is a SIM card slot. For a device that’s so geared towards working on the move, it’s bizarre that Microsoft didn’t see fit to at least offer a 3G/4G option.

Secreted beneath that flip-out stand is also a microSDXC slot, which is capable of adding another 64GB of removable storage to the Surface. That might well be a necessity if you opt for the 32GB version, which has only 16GB of free space, with almost half the stated storage consumed by Windows, the Office apps and the recovery partition. The 64GB version of the Surface offers 46GB of free space.

So there’s little to complain about on the hardware side, but what about the software?

The most obvious of these is that almost all desktop software is prohibited. Even though the traditional Windows desktop remains a part of the build - it’s available through a Start menu tile just as it is in the x86 versions of Windows 8 - the only software permitted to run here is the preinstalled Office suite and Internet Explorer.

Even if traditional software vendors were prepared to recompile their software for ARM, it would make no difference; Microsoft has pulled up the drawbridge.

While Internet Explorer is perfectly happy to let you download installers for desktop applications such as Google Chrome, attempts to click on the EXE file are met with a warning that "this app can’t run on your PC" and an invitation to visit the Windows Store.

The very presence of the desktop in Windows RT almost feels like you’re being taunted with what you’re missing out on. Why Microsoft didn’t remove the desktop altogether and simply allow users to run full-screen instances of the Office apps from the Start screen is bewildering. It has all the hallmarks of a bodge: a compromise to resolve the conflicting priorities of the Windows and Office teams.

It’s also worth noting that the version of Office bundled with Windows RT is Home & Student - which means it isn’t licensed for business use , and that there’s no Outlook included in the deal.

Try to share a document from Word via email and you’re presented with an abrupt warning message informing you that there’s no email program installed, despite the presence of the Mail app in Windows 8. The Share charm provides no relief either, as nothing can be shared from the desktop.

That said, the presence of almost fully-featured Office apps is a considerable bonus - no other tablet has a complement of apps that can compete with Word, PowerPoint, Excel and OneNote.

We say almost fully-featured because a few notable features such as macros and, bizarrely, full SkyDrive integration are absent.

Plus, when you try to push Office hard - fiddling with complex spreadsheets or adding high-resolution photos to heavily formatted Word documents - performance plummets, sometimes causing Office to dither like a contestant answering the final question on Who Wants To Be A Millionaire?

It’s worth noting that Windows RT also offers separate user accounts, meaning that you don’t have to risk giving the kids the opportunity to wipe your data when they want to play a game in the back seat of the car.