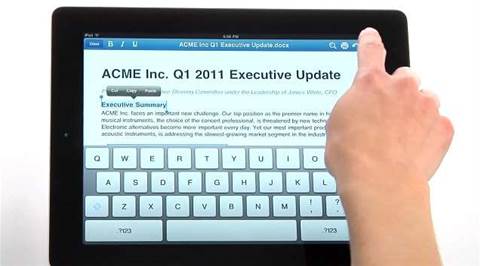 Need to open and edit Office docs for work on your iPad? If you have a Google Apps for Business account you can now get a free version of Quickoffice for iPad,

There's now another free option for working with Office documents on an iPad.

Google subsidiary Quickoffice has released a free version of its Quickoffice app for iPad.

The app is intended for working with documents stored in Google Drive.

Quickoffice Pro HD (the paid version, which is currently reduced to $8.49 in "Season of Giving" promotion) adds PDF export, AirPrint support, and when used in conjunction with either SharePlus Pro or Coaxion, the ability to open, edit and save files from SharePoint.

Other ways of editing Office documents include iWork and Office Web Apps.