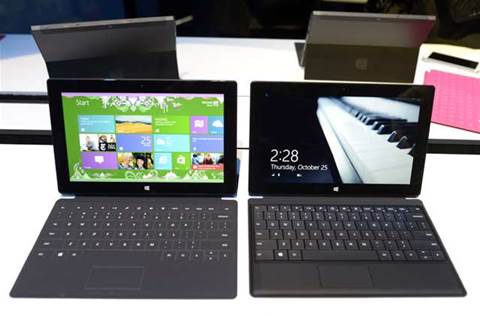 Good news if you are curious about Microsoft's new Surface tablet - from this Friday reports say you'll be able to see it in Harvey Norman.

Want an iPad but have a sneaking suspicion you should take a look at Microsoft's new Surface, just to be sure?

The place to do that will be Harvey Norman where the Surface will be on sale in some shops from this Friday, according to the Australian Financial Review.

You'll need to find a metropolitan or "eastern seaboard" shop though, according to this article by our sister site CRN.

At $559 (that price is without the separate cover we'd recommend getting, which is also a keyboard), the Surface is in the same ballpark as the new iPad, which starts at $539. Add the cheaper of the two keyboard covers, and the cost increases to just under $700.

So the Surface isn't exactly cheap. Also, keep in mind, this is the cheaper Surface - a more expensive Surface with Windows 8 Pro will cost more than $1,000 with a keyboard cover, but we aren't expecting it to go on sale till next year.

Still, CRN quotes a Harvey Norman spokesperson saying interest in the Surface has been "nothing short of amazing".

In our opinon, it is a promising product. You can read more about the Surface here.