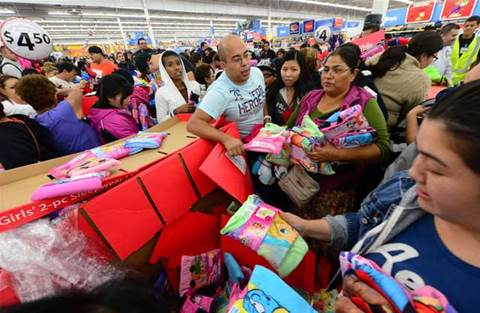 Forget Christmas eve queues; the lure of a bargain has already led to pistols and fistfights at Thanksgiving Day sales in the US.

People love a bargain, even it's not on the Internet. Above all though, it's one day super-sale events that are drawing in massive crowds and with them some wild scenes.

Case in point: a man in the US queuing for a Thanksgiving Day shopping sales who allegedly pulled a 9mm semi-automatic pistol after a fellow shopper punched him, according to the San Antonio Express-News.

The story has been picked up by various web sites, and it's not the only example of bad behaviour by Thanksgiving Day shoppers. This video of shoppers literally fighting and shoving is particularly disturbing:

Not only that, a report claims two people were shot near a Walmart.

With brands like Apple and Lenovo already timing sales in Australia to coincide with the US Thanksgiving Day sale period, it will be interesting to see where this super-sale tend leads.