iPad 4 on a contract: Telstra vs Optus 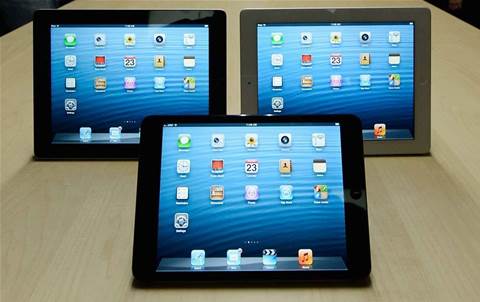 We compare Optus and Telstra's iPad 4 contract plans. Which is the better buy?

Both Optus and Telstra now have the iPad 4 available on contract plans so you can avoid the upfront cost of the iPad 4 and grab it on a monthly contract.

Let's look at how the prices compare.

There are three iPad 4 models to choose from that connect to Australian 4G networks. All are the same other than their different storage capacities. There's an entry level 16GB, mid range 32GB and the top end is covered by the 64GB model.

Telstra offers four plans. The cheapest is $49 per month for two years and includes 1GB of data. $54 per month gets you 4GB, $69 per month increases that 10 8GB and the most expensive plan delivers 15GB per month for $104. There's no upfront cost.

Optus has a little more flexibility with both 12 and 24 month plans and between 2Gb and 20GB per month. If we do a like-for-like comparison, the Optus 10GB plan over 24 months is just $63 per month. Out of that monthly cost, $28.05 is for the device and the remainder is for the data. Over the course of the two year agreement that's over $900 cheaper.

Telstra's plans are quite straightforward from this point. The options for the 32GB iPad 4 are identical to the 16GB model but cost $4 more each month.

With Optus, The monthly costs start with a $32.05 charge for the iPad and then the same data rates as the 16GB unit. So, a 32GB iPad 4 on a 10GB per month plan for two years costs $67 per month - that's substantially cheaper than Telstra's offering.

To move to a 64GB iPad 4 with Telstra, just add another $5 per month to the 32GB pricing each month.

Optus, as you'd expect trumps this pricing significantly with a two year agreement costing about $1000 less over the life of the contract. The monthly cost for a 64GB iPad 4 with 10GB of data is $72 per month - well under Telstra's equivalent offering of $113 per month.

How to decide: Cost vs coverage

There are two sides to the 4G coin. One is cost - one this score Optus is clearly the less expensive option.

However, if coverage is critical then we'd suggest that Telstra has the broader 4G coverage map at this time as we found in our recent look at Telstra and Optus pre-paid 4G deals.