Shivering in summer? Sweating in winter? Your building is living a lie 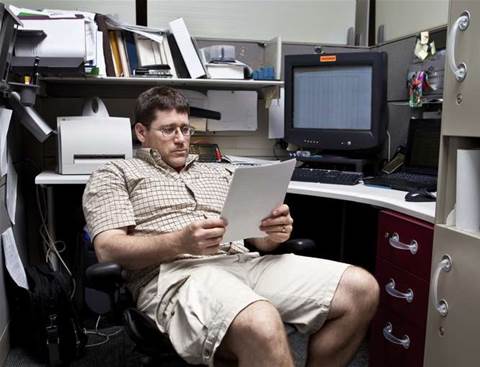 I have a challenge for the next time you’re at work. Take a look around at your colleagues. Now look at yourself. What are you wearing?

It’s still winter (just), so if you’re in the southern states you should be wearing a few layers. But my guess is neither you nor your colleagues are appropriately attired. In fact, if statistics are to be believed (and in this case it’s safe to trust them) you’re most likely wearing single layers in winter and jumpers in summer. It’s an odd phenomenon, even a little comical, but it has serious ramifications on your work and on our environment.

A combination of regulations and popular (but incorrect) misconceptions about building engineering has contributed to this problem. There is a widespread belief that the “optimal temperature” for human productivity is 21.5degC. But if you look at the science of indoor environmental quality (my speciality), there’s no basis for this belief .

This figure has been picked up and repeated so many times many businesses accept it as the truth, never questioning why so low or so specific. In fact, research demonstrates Australian air-conditioned offices perform better at 24-25 degrees in summer.

While the difference might sound minor, the implications are significant. Indoor climate control (heating, ventilation and air-conditioning) accounts for at least half of the energy used in commercial buildings. Artificial lighting makes up a substantial slice of the remainder.

We now spend an average of 90% of our time indoors. The Intergovernmental Panel on Climate Change identified the global buildings sector as most promising for climate change mitigation, double the second most promising sector – agriculture.

In summer, the cooler you make your office the more energy it takes. Each degree of air conditioning saved equates to a 7-10% reduction in air conditioning costs. At the comfortable mark of 24 degrees, businesses could be saving up to 30% on air-conditioning use. Turning down heating in winter can have similar cost advantages.

Yet many of us shiver in summer and sweat in winter because this artificial figure, 21.5 degrees, has been enshrined in tenancy contracts. Craig Roussac, from one of Australia’s leading commercial building portfolio owners, Investa, says tenants have demanded buildings be air-conditioned to 21.5 degrees.

Meanwhile, companies leasing offices have written this temperature into tenancy contracts in the misguided belief it optimises comfort and productivity. Building owners and managers are unable to turn off or change air-conditioning settings to something more comfortable, productive and energy-efficient, because doing so risks legal repercussions.

“This sort of thinking is one of the reasons we are wasting so much energy,” says Roussac. “A better understanding of how we physiologically react to and perceive temperature can lead to significant savings in otherwise wasted energy."

Ironically, green building principles and green leases are also based on the so-called “science” that 21.5 degrees is an optimal figure. While it is admirable so many offices have adopted the green building principles of solar energy and indoor plants, at the same time they are ignoring savings from properly calibrating air conditioning systems and changing staff clothing habits.

I lead a team of researchers investigating building comfort at the University of Sydney. We’ve found that minor and inexpensive changes can have significant impacts on worker comfort. The science is compelling. We know adaptable spaces are much more important than ones where temperature is tightly controlled. Workers are more comfortable if they can control their immediate environments by drawing blinds and opening windows than when whole floors are uniformly cooled or warmed to an arbitrary figure.

We need to reduce energy use and then find ways of making what we do use go further. Tenants must stop demanding uniform cooling when negotiating leases, and property owners must explain how other changes, such as adaptable spaces, can contribute to productivity.

New technologies may well contain the key to overcoming the challenges posed by climate change, but until they’re developed and widespread we’re far better off moderating our demands. Given that we know air-conditioning and heating is so poorly calibrated in so many offices, it seems the perfect place to start.

So go on, put on a jumper and turn down the heating. You’ll be making your work, your office and your country better. It’s all just a matter of degree.