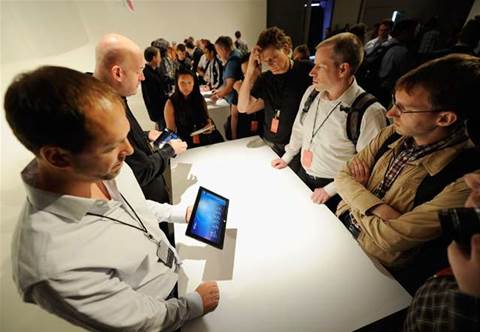 A rumour published yesterday by Engadget is suggesting that Microsoft will be undercutting the existing tablet market significantly with a retail price of just $199.

Windows RT, the version of Windows 8 that will come on ARM processor based tablets, is coming soon with a number of vendors announced. In competition with its own hardware partners, Microsoft's Surface tablet will undercut the market if the pricing leaks are true.
As expected, the usual suspects are represented with Asus, Dell, Lenovo, and Samsung all planning to release devices running Windows RT. The conspicous absentee from the list is HP, but otherwise there aren't any suprises in the list.
Newsletter Signup

I have read and accept the privacy policy and terms and conditions and by submitting my email address I agree to receive the Business IT newsletter and receive special offers on behalf of Business IT, nextmedia and its valued partners. We will not share your details with third parties.
Tablets running Windows RT will include a free version of Office 2013 but other extra apps will only be available through the Windows Store. In other words, it's a similar model to Apple's iPad where the only apps you can have are those available through a curated store.
A rumour published yesterday by Engadget is suggesting that Microsoft will be undercutting the existing tablet market significantly with a retail price of just $199. When you consider that Surface includes a keyboard and office suite this is a major shot across the bow of the Apple and Android tablet market. It also means that businesses will have, for the first time, a viable, single platform that goes from smartphone to tablet to desktop.
What's this mean for you and your business?
If Surface and the other Windows RT tablets hit the market in the next few weeks then Apple might see some stern competition on two fronts for the first time since the first iPad was released. The rumoured iPad Mini and iOS will not be the only game in town.
New and updated Android tablets, like the Nexus 7 are coming from one side and Windows RT from the other. Both have committed customer bases and, in the case of Windows RT, potential customers that have been waiting for business-ready tablet that integrates with the rest of their work environment.
Copyright © BIT (Business IT). All rights reserved.
Tags:
asus dell engadget hardware hp lenovo microsoft price rt samsung surface tablets windows windows 8
By Anthony Caruana
Aug 15 2012
11:00AM