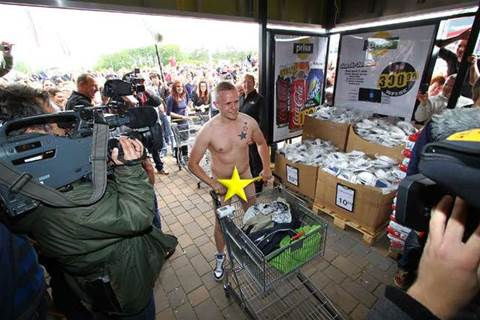 There’s nothing like a bit of officially sanctioned public nudity to draw the media, and when you combine it with the promise of free shopping…this is what happens.

Say what you will about your Flybuys and shopper loyalty schemes – in the northern German city of Suederluegum they do retail marketing differently.

Case in point: this opening of a supermarket, which from the photos, seemed to draw more than the usual fair share of publicity – due in no small amount to the fact the first 100 customers were offered free shopping up to a limit of 2,000 Danish krones (approximately $330).

According to some reports, more than 200 people turned up.

Meanwhile clothing company Desigual has been inviting shoppers to turn up in their underwear for the chance of getting a free outfit. We’ve seen photos of crowds shivering outside shops in London, Madrid, as well as half-dressed customers in a shop in Dusseldorf.

It appears that in some places there’s nothing like a bit of officially sanctioned public nudity to draw the media; and when you combine it with the promise of free shopping – well, it’s a heady atmosphere some customers just can’t resist.

As for whether this would attract crowds in Australia - any opinions?